Is It Time to implement Hybrid Cloud in your company? 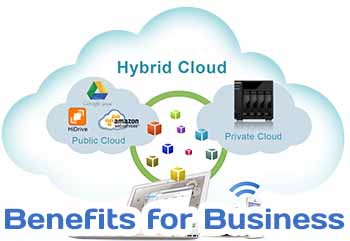 Enterprises are turning to hybrid cloud to modernize IT for the digital era. But, given the significant complexity that still exists today in cross-cloud management and integration, many enterprises are struggling to create an effective hybrid cloud strategy.

What This Report Covers

This report recommends a three-step approach that will help you build a more functional and more mature hybrid cloud environment:

This approach will provide a higher level of automation, visibility, and consistency across all environments, private and public, ensuring your enterprise operates at the highest level and achieves the benefits of hybrid cloud.

Designed for IT leaders and business decision makers, this report will help you assess, plan, and implement this hybrid cloud strategy to achieve greater control over all IT services, regardless of where they are running.

The Cloud Is Reshaping Enterprise IT

Over the last 10 years, the increasing capabilities of the public cloud have dramatically reshaped the enterprise IT landscape. Many enterprises initially announced they were adopting a “cloud-first” strategy or that they were “all in” on the public cloud. That early euphoria has now been tempered by reality, as enterprises have learned—often the hard way—that not every application is suited to public cloud. Many were shocked at how quickly the bills for public cloud services added up. When you factor in all the costs—getting the performance you need, data protection costs, and other variables—it can be twice as much to run predictable workloads in the cloud versus on-premises.

By 2016, a study by IDG Research noted that, “nearly 40% of organizations with public cloud experience report having moved public cloud workloads back to on-premises, mostly due to security and cost concerns.” This doesn’t mean that enterprises have been abandoning the cloud. They’re simply taking a “hybrid” approach and working to strike a smarter balance between workloads in the cloud and workloads that run on-premises, whether on traditional infrastructure or in a private cloud.

According to IDC, by 2015 more than 80% of companies had already adopted a hybrid cloud IT strategy. A combination of on-premises IT services and cloud-based services deliver substantial business benefits and give your company a competitive edge over less nimble rivals.

What Is a Hybrid Cloud?

In the loosest definition, a hybrid cloud combines on-premises IT (traditional infrastructure and private cloud) with off-premises resources or services from a public cloud—such as Google Cloud Platform (GCP), Amazon Web Services (AWS), or Microsoft Azure—or at a cloud service provider (CSP) or software-as-a-service (SaaS) provider, as illustrated in Figure 1.

In this report I take pains to distinguish between the big public clouds and smaller cloud service providers. As you’ll learn, each may have a role to play in your hybrid cloud strategy.

Figure 1. A hybrid cloud can be composed of both on-premises (IT infrastructure, private cloud) and off-premises (public cloud, CSP, SaaS) elements.

Another term that is becoming common is “multi-cloud.” Just as it sounds, multi-cloud is the strategy of using multiple different clouds that could include a variety of private, public, and hybrid cloud deployments to satisfy your IT needs.

What About Enterprise Cloud?

Enterprise clouds incorporate the elements of many other cloud types, delivering the benefits of private, hybrid, and multi-cloud models in a way that may more closely match your business needs and the capabilities of your IT team.

Applications and the Hybrid Cloud

For many of us in IT, infrastructure has such a prominent place in our thinking that it’s sometimes easy to forget that it’s not an end in itself. It’s important to keep in mind that hybrid cloud is simply a means to deliver the applications and services your business needs to succeed. This includes the traditional business applications that you’ve relied on for years, and the next-generation, cloud-native applications that will propel your business into the future. In this report, these are referred to as mode 1 and mode 2 applications:

You probably already know that some applications are ideally suited for public cloud, some are better on-premises, and some can move back and forth—or span the two.

A Single Infrastructure or Bimodal IT?

Supporting mode 1 and mode 2 applications with separate infrastructure (and possibly separate teams) is sometimes referred to as bimodal IT. Although it may be tempting to run mode 1 and mode 2 applications in this fashion, this approach will limit agility in the long run. Your hybrid cloud needs to seamlessly encompass both. After conducting interviews with IT leaders from a variety of industries, Bain & Company reported, “Companies are ﬁnding that the two-speed IT model is fraught with practical issues that make it unsustainable.”

The State of Hybrid Cloud

As enterprises in all industries pursue digital transformation and embrace new technologies like artificial intelligence and the Internet of Things (IoT), hybrid cloud adoption is poised to accelerate. As part of this process, many enterprises are also pursuing datacenter modernization. IDC predicts that, “by 2020, the heavy workload demands of next-generation applications and new IT architectures in critical business facilities will have forced 55% of enterprises to modernize their datacenter assets through updates to existing facilities and/or the deployment of new facilities.”

For many enterprises, the hybrid cloud up to this point has been an organic outgrowth of accelerating business needs as much as it has been planned. You may already be operating in a hybrid model and progressing to a multi-cloud approach. However, numerous pain points exist. Global management and the necessary integrations between on-premises and cloud environments are still lacking.

For your business to compete and succeed in the long run, your IT team will need to figure out how to overcome its current IT challenges—both on-premises and in the cloud—to efficiently deliver the applications and services your business needs. This report is intended to help guide you with these important decisions.

The cloud is dramatically reshaping the enterprise IT landscape. After an early rush to the public cloud, the majority of companies are settling on a hybrid cloud strategy that can utilize resources from traditional enterprise IT, private clouds, public cloud providers, and CSPs.