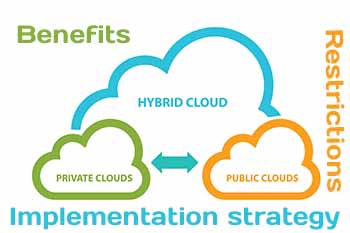 What Are the Benefits of Hybrid Cloud?

If the hybrid cloud is going to be such an important part of your future, what should your business hope to gain? The hybrid model offers many potential benefits:

By far the most important benefit of a properly architected hybrid cloud is increased business agility. You have ready access to resources to support new applications, accommodate development and testing projects, or to quickly address unanticipated needs. In an ideal world, workloads can be moved quickly between on-premises and cloud locations, and leverage resources from multiple locations. (Unfortunately, API and architectural differences between different cloud providers make this challenging.)

Many industries experience big variations in resource demand. One clear example is retail, where activity spikes before the December holidays. The hybrid cloud model gives you the ability to respond elastically to resource demands. In a similar vein, many individual applications have big fluctuations in resource demand. Such applications need to run in an environment where they can grab resources when they are needed and release them when they are not, reducing overall expenses.

A well-designed hybrid cloud can allow IT users—such as developers and line-of-business managers—to gain access to IT infrastructure and services through a self-service portal. This not only gives them immediate access to services, it reduces the burden on IT since it no longer has to serve as the middleman.

Hybrid cloud can help you deliver new products and services more quickly by eliminating barriers that slow your business and development teams down. New digital services become easier to create and deploy, and developers and test engineers can better access the resources they need when they need them.

A hybrid cloud model lets you run every application as efficiently as possible, while adopting a pay-as-you-go model that reduces your capital investments in infrastructure and datacenters. Designing datacenters to accommodate peak loads only to have infrastructure sitting idle much of the time is a poor choice versus adding cloud resources when needed to accommodate peak periods.

If you adopt a cloud-only model, it’s almost impossible to avoid getting locked into one or two cloud vendors. It can be cost prohibitive to get your data out of the cloud, so you need to exercise caution before you move data from datacenters into the cloud.

In today’s competitive business environment, enterprises cannot afford to find themselves in a situation where they are unable to gain immediate access to technologies that could provide a business advantage. One example of this is AI. The large public clouds are innovating rapidly and offering competing services. A hybrid cloud model gives you the flexibility to use the best technology to seize opportunities.

Whether or not you actually achieve these benefits depends on the choices you make, including your private and public cloud, cloud service provider, and SaaS choices. Reliance on legacy datacenter architectures—whether you own the equipment and software or not—or getting locked into a specific infrastructure stack can add to technical debt, increase operating costs, and limit future flexibility. You need to keep your options open, so you can choose the best destination for each workload. The results you ultimately achieve depend on how mature your hybrid cloud operations are.

Why Is Hybrid Cloud the Preferred Enterprise Model?

More than one established enterprise has rushed to the public cloud over the last several years with mixed results. The current trend towards moving some workloads back on-premises is a clear sign that initial expectations and reality were not aligned.

In many cases, the public cloud remains a better fit for mode 2 or cloud-native apps than for more traditional mode 1 apps. The benefits of porting mode 1 applications to the cloud may simply not be worth the effort. Most organizations have hundreds of such applications that they will continue to need far into the future.

If that prediction seems unrealistic to you, just consider the continuing niche occupied by the mainframe computer. It’s been more than 30 years since its fall from grace, but mainframes—and the applications they run—are still with us.

There are a variety of challenges that may result when running enterprise workloads in the public cloud, including:

Much of the initial enthusiasm for public cloud was based on expectations of reduced costs, but this has rarely been the result. Applications with predictable resource requirements—whether mode 1 or mode 2—may be more cost effective to run on-premises than in the cloud.

It seems like there’s a significant public cloud outage almost every year that makes enterprises reexamine their cloud plans. You may not want the availability of critical applications that your company relies on to be in someone else’s hands.

For some applications and data, your company may not be willing to give up the level of control (including control over availability) that you get by running on-premises.

It may seem counter-intuitive, but the public cloud may not deliver the necessary application performance. This is especially true for mode 1 applications that are designed to scale up rather than scale out.

Depending on your industry (and the countries you’re operating in), you may be subject to stringent regulatory requirements that make public cloud unattractive. This has been the case in financial services and healthcare in particular, although things are starting to change.

Managing security in the cloud is substantially different from managing security on-premises. A number of recent and well-publicized cases where data was accidentally left publicly accessible underscore this difference. Enterprises that end up repatriating applications from the cloud most often cite security or cost as the reason.

This isn’t to say that public clouds—or CSPs—are a bad choice. They have an important role to play. Successful enterprises simply need to be smart about choosing the best location for each application or service in their portfolios, while retaining the flexibility to make adjustments as requirements change.

Are You Ready for GDPR?

Data sovereignty and compliance regulations continue to evolve. The European Union (EU) is in the process of putting a framework in place to protect the personal data of its citizens. The General Data Protection Regulation (GDPR) is intended to strengthen and unify data protection. At the time this report was written, GDPR was scheduled to take effect May 25, 2018, so it will likely be in effect by the time you read this.

This is a positive step for individuals residing in the EU, giving them more control over their data, including sensitive personal data and unique identifiers, genetic and biometric data, and pseudonymous data.

GDPR will change the way all companies do business. It applies not only to companies based in the EU, but every company that handles data belonging to EU residents. If your IT team has not prepared to address GDPR, this primer is a good place to get oriented.

In the last few years, enterprises have begun to recognize the extent to which data and applications are being dispersed, not just across private and public clouds, but also distributed remote office/branch office (ROBO) and disaster recovery (DR) environments and many other edge locations like retail stores, distribution centers, and production facilities.

The Internet of Things (IoT) is accelerating this trend as the number and variety of sensors increases to satisfy a variety of needs. The sheer amount of datacoming from sensors, and the need to process and respond to the data immediately, often requires local processing. A recent article on edge computing in The Economist, aptly titled “The Era of the Cloud’s Total Dominance Is Drawing to a Close,” notes the significant financial and other challenges associated with moving all data to the cloud for processing.

Your organization needs to factor the needs of edge and IoT deployments into your end-to-end cloud design. Some locations will likely need increasing amounts of computing and storage to process data locally and take action.

You might think that companies born in the cloud era—so-called “cloud-native” companies that lack the legacy applications and technical debt of longer-established enterprises—would naturally stick with an IT model based on the public cloud. But, even these companies may be gravitating toward hybrid cloud.

The best-known example is Dropbox. While Dropbox retains a footprint in AWS, over the last several years it built its own datacenters and moved 500 PB of data out of AWS. This was a huge undertaking for a company that had only about 1,500 employees at the time. Why? Control, performance, and cost.

If you need any further evidence that hybrid cloud is going to be around a while, all the major public clouds—most of whom resisted the idea of hybrid cloud for reasons that should be obvious—have begun making concessions to accommodate the hybrid cloud needs of enterprise customers:

Amazon now offers a variety of services to address hybrid cloud needs including data, networking, identity management, and others. VMware Cloud on AWS began to roll out in 2017. AWS has also begun offering services to address on-premises, edge, and IoT requirements, such as AWS Greengrass and Amazon Linux 2.

Google is forging alliances with major IT vendors, including a partnership with Nutanix, and another with Cisco. GCP seems focused on support for next-generation cloud-native applications.

Microsoft has been less averse to the idea of hybrid cloud than its competitors. With the release of Azure Stack in mid-2017, Microsoft enables applications to run on-premises on a stack identical to the one in the Azure cloud, facilitating movement of workloads between your on-premises datacenters and Azure.

A Strategy for Hybrid Cloud Success

The major public cloud vendors expect you to use their tools to integrate with your datacenters, and at this point there is very limited interoperability between clouds or integration across clouds. If you want to use more than one public cloud, you’ll either have to live with the fact that the interfaces and tools are different for each cloud you use (which may require separate teams for each cloud) or find a higher-level framework that abstracts the differences. (See 1.) 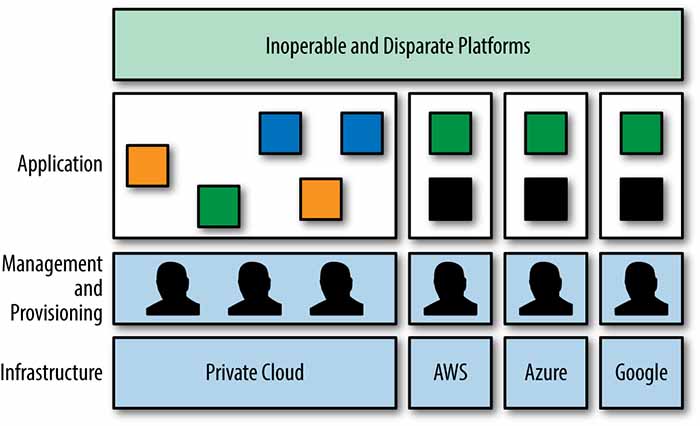 Figure 1. The biggest challenge in creating a hybrid cloud is that the tools are different for every cloud environment today. A single, over-arching set of tools is needed to manage everything.

You could choose a single public cloud provider and accept the vendor lock-in that results. (As a practical matter, many enterprises have probably tacitly adopted this approach already.)  But, even with a single cloud provider, you probably won’t be able to manage everything—on-premises and in the cloud—using a single set of tools.

All the guidelines that exist for assessing the maturity of hybrid cloud operations have one thing in common: at the highest level of maturity, they stress the need for automation, visibility, and consistency across all environments, private and public.

Most approaches to hybrid cloud are based on a strategy of trying to determine the best way to make all the disparate pieces—legacy infrastructure in your datacenters, public clouds, and cloud service providers—somehow work together. Based on the realities of the current cloud environment, this report proposes an alternative approach that has a higher likelihood of success:

Your enterprise needs a cloud operating system that gives you the ability to monitor, manage, and orchestrate across all environments using a single set of tools. This is the only way to ensure you operate at the highest level to achieve the full benefits of hybrid cloud.

Author: aqepa
More by this author: