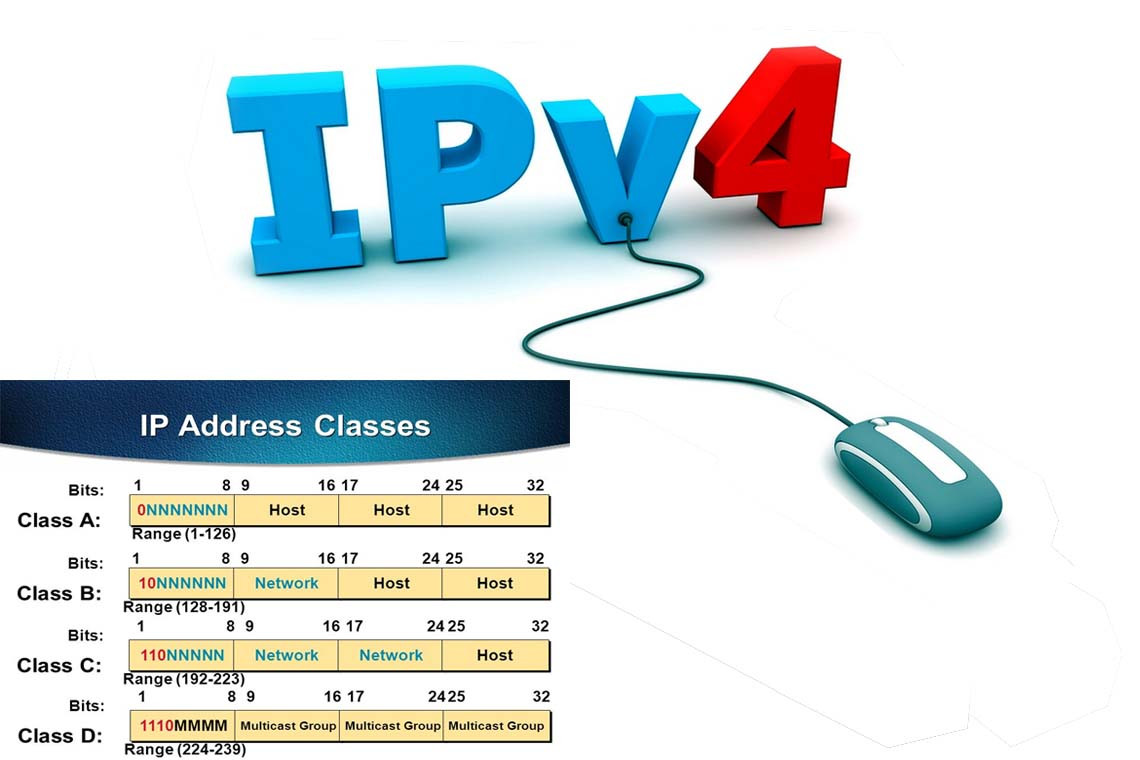 IPv4 addresses were originally divided into five different classes according to size. These classes are no longer officially used because concepts such as classless interdomain routing (CIDR) and the mere fact that no more addresses are left to hand out have made address classes a moot point. But the terminology still remains out there and many IT professionals learned using this system, so it is a good starting point for understanding networks and, ultimately, subnetting of networks.

Address classes were broken down based on a concept called the leading bit pattern of the first octet of an IPv4 address. Remember that a machine reads IPv4 addressing as a single 32-bit number, so the patterns that were developed were all based in binary. This makes for some not-so-obvious decimal groupings of addresses.

Classes were named A through E and had the characteristics described in Table 1.

This chart tells us more about the sizing of the different classes of addresses:

Combining this knowledge with the information from the IPv4 address class chart, we can make the following conclusions as well:

RFC 1918 addresses were created to help slow down the depletion of IPv4 addresses. Addresses that are part of RFC 1918 are to be used on private, internal networks only. They can be routed within the network, but they are not allowed out onto the public Internet. Most companies and homes today use private, internal RFC 1918 addresses in their networks. In order for a device that is using an RFC 1918 address to get out onto the public Internet, that address has to go through a device that uses Network Address Translation (NAT) and have its private address translated into an acceptable public address.

The original design of address classes had a network of all binary 0s or all binary 1s as invalid. Early devices used a string of 0s or 1s as internal communication codes so they could not be used. Therefore, network 0.0.0.0 and network 255.x.x.x are invalid. The 255 network is part of the reserved Class E network space, so we never had a chance to use it, but the 0 network is part of the assignable Class A address space. Another 16,777,214 addresses lost.

We originally thought that 232 bit addressing space would be impossible to reach, but the advent of the public Internet and then mobile devices led to the need for a new addressing scheme. IPv6 is a 128-bit-wide addressing space. Reaching the limit of 2128 addresses might seem impossible, but with the Internet of Things (IoT) becoming a reality, is it impossible?

When two addresses are in the same network, they are said to be local to each other. When two addresses are in different networks, they are said to be remote to each other. Why is this distinction important? Local devices can communicate directly with each other. Remote devices will need a Layer 3 device (such as a router or a Layer 3 switch) to facilitate communication between the two endpoints. A common mistake that occurs in networks once they are subnetted down to smaller networks is that devices that were once local to each other are now remote, and without that Layer 3 device to assist, communication no longer occurs. Being able to tell if two devices are local or remote is a valuable tool to assist in troubleshooting communication problems.

Although classful addressing was originally used in the early days of IPv4 usage, it was quickly discovered that there were inefficiencies in this rigid scheme—who really needs 16 million hosts in a single network? Concepts such as CIDR and variable-length subnet masking (VLSM) were created to allow for a more efficient distribution of IPv4 addresses and networks.

In classless addressing, the rules all stay the same except for one: the size of the default network mask. With classless addressing, the network mask can be changed from the default sizes of /8, /16, or /24 in order to accommodate whatever size of network is required. For example, a common practice is to take a Class A network, such as the RFC 1918 10.0.0.0 network, and break that one large network into smaller, more manageable networks. So instead of a single network of 16.7 million hosts, we can use a /16 mask and create 256 networks of 65,534 hosts each:

We can prove this using binary to show that no other rules of IP addressing have changed:

The rules for network, valid host, and broadcast addresses have also not changed. If we take the column of H bits above and break it down further we get the following:

Another common occurrence is to take a Class A network and use the Class C default mask to create 65,536 networks of 254 hosts per network:

A third common occurrence is to take a Class B network and use the Class C default Mask to create 256 networks of 254 hosts per network:

What we have done in all of these examples is to break down one large network into many smaller, more manageable networks. This is known as subnetting. The next section will show you how to do this for any size of subnet that you may require.