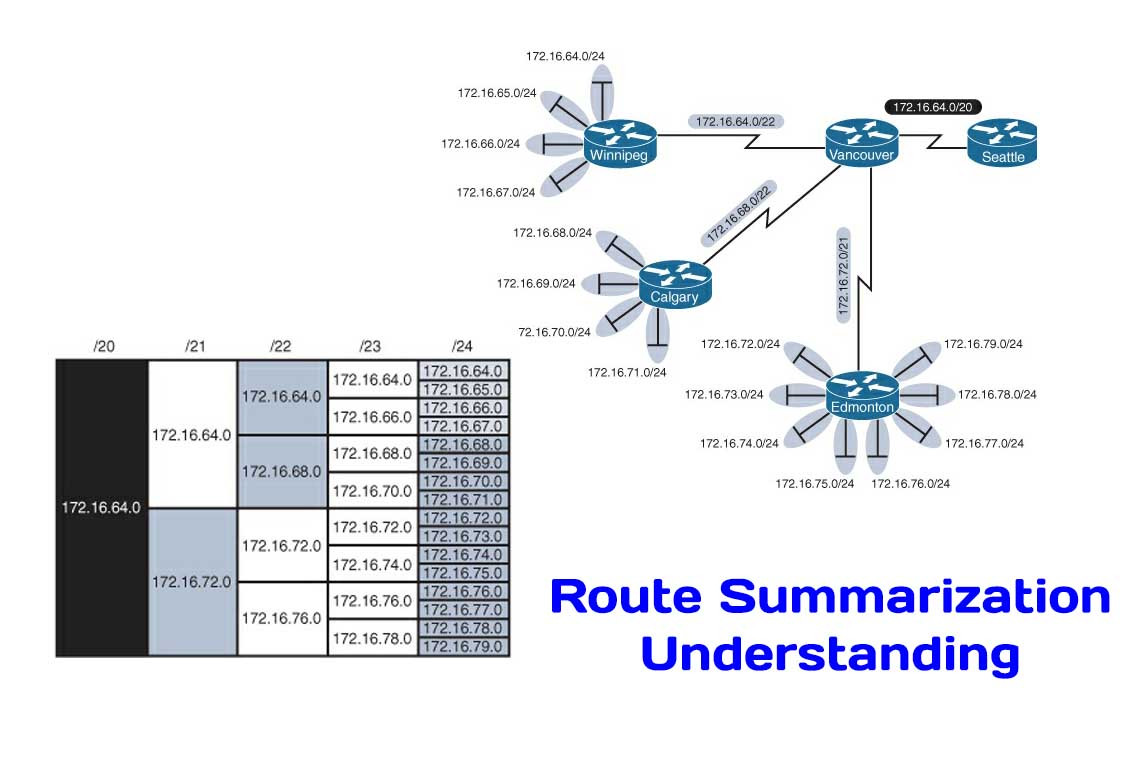 Route summarization, or supernetting, is needed to reduce the number of routes that a router advertises to its neighbor. Remember that for every route you advertise, the size of your update grows. It has been said that if there were no route summarization, the Internet backbone would have collapsed from the sheer size of its own routing tables back in 1997!

Routing updates, whether done with a distance-vector protocol or a link-state protocol, grow with the number of routes you need to advertise. In simple terms, a router that needs to advertise ten routes needs ten specific lines in its update packet. The more routes you have to advertise, the bigger the packet. The bigger the packet, the more bandwidth the update takes, reducing the bandwidth available to transfer data. But with route summarization, you can advertise many routes with only one line in an update packet. This reduces the size of the update, allowing you more bandwidth for data transfer.

Also, when a new data flow enters a router, the router must do a lookup in its routing table to determine which interface the traffic must be sent out. The larger the routing tables, the longer this takes, leading to more used router CPU cycles to perform the lookup. Therefore, a second reason for route summarization is that you want to minimize the amount of time and router CPU cycles that are used to route traffic.

This example is a very simplified explanation of how routers send updates to each other. For a more in-depth description, I highly recommend you go out and read Jeff Doyle and Jennifer Carroll’s book Routing TCP/IP, Volume I, Second Edition (Cisco Press, 2005). This book has been around for many years and is considered by most to be the authority on how the different routing protocols work. If you are considering continuing on in your certification path to try and achieve the CCIE, you need to buy Doyle’s book—and memorize it; it’s that good.

Refer to Figure 1 to assist you as you go through the following explanation of an example of route summarization. 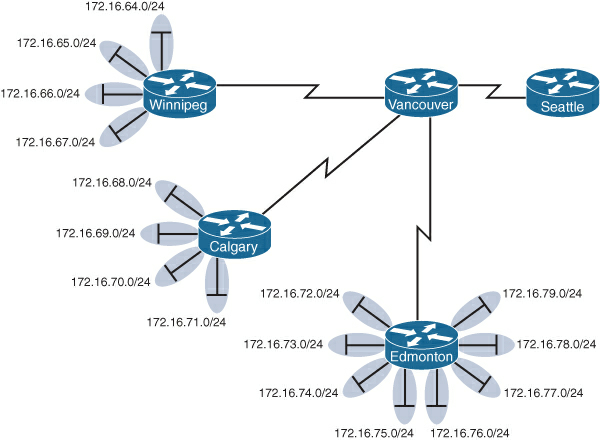 To do this, you need to look at the routes in binary to see if there are any specific bit patterns that you can use to your advantage. What you are looking for are common bits on the network side of the addresses. Because all of these networks are /24 networks, you want to see which of the first 24 bits are common to all four networks.

This address, when sent to the upstream Vancouver router, will tell Vancouver: “If you have any packets that are addressed to networks that have the first 22 bits in the pattern of 10101100.00010000.010000xx.xxxxxxxx, then send them to me here in Winnipeg.”

By sending one route to Vancouver with this supernetted subnet mask, you have advertised four routes in one line instead of using four lines. Much more efficient!

For Calgary, you do the same thing that you did for Winnipeg—look for common bit patterns in the routes:

Once again, the first 22 bits are common. The summarized route is therefore

For Edmonton, you do the same thing that you did for Winnipeg and Calgary—look for common bit patterns in the routes:

For Edmonton, the first 21 bits are common. The summarized route is therefore

Figure 2 shows what the network looks like, with Winnipeg, Calgary, and Edmonton sending their summarized routes to Vancouver.

Yes, you can summarize Vancouver’s routes to Seattle. You continue in the same format as before. Take the routes that Winnipeg, Calgary, and Edmonton sent to Vancouver, and look for common bit patterns:

Because there are 20 bits that are common, you can create one summary route for Vancouver to send to Seattle:

Vancouver has now told Seattle that in one line of a routing update, 16 different networks are being advertised. This is much more efficient than sending 16 lines in a routing update to be processed.

Figure 3 shows what the routing updates would look like with route summarization taking place. 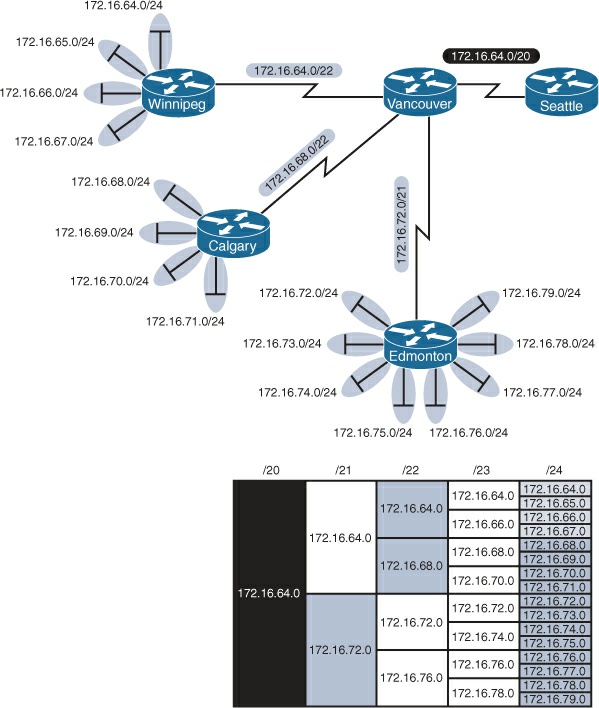 Another positive aspect of route summarization has to do with route flapping. Route flapping is when a network, for whatever reason (such as interface hardware failure or misconfiguration), goes up and down on a router, causing that router to constantly advertise changes about that network. Route summarization can help insulate upstream neighbors from these problems.

Consider router Edmonton from Figure 1. Suppose that network 172.16.74.0/24 goes down. Without route summarization, Edmonton would advertise Vancouver to remove that network. Vancouver would forward that same message upstream to Calgary, Winnipeg, Seattle, and so on. Now assume the network comes back online a few seconds later. Edmonton would have to send another update informing Vancouver of the change. Each time a change needs to be advertised, the router must use CPU resources. If that route were to flap, the routers would constantly have to update their own tables, as well as advertise changes to their neighbors. In a CPU-intensive protocol such as OSPF, the constant hit on the CPU might make a noticeable change to the speed at which network traffic reaches its destination.

Route summarization enables you to avoid this problem. Even though Edmonton would still have to deal with the route constantly going up and down, no one else would notice. Edmonton advertises a single summarized route, 172.16.72.0/21, to Vancouver. Even though one of the networks is going up and down, this does not invalidate the route to the other networks that were summarized. Edmonton will deal with its own route flap, but Vancouver will be unaware of the problem downstream in Edmonton. Summarization can effectively protect or insulate other routers from route flaps.

To create route summarization, there are some necessary requirements:

Because most networks use NAT and the RFC 10.0.0.0/8 network internally, it is important when creating your network design that you assign network subnets in a way that they can be easily summarized. A little more planning now can save you a lot of grief later.