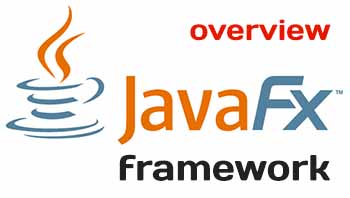 JavaFX is an open source Java-based framework for developing rich client applications. It is comparable to other frameworks on the market such as Adobe Flex and Microsoft Silverlight. JavaFX is also seen as the successor of Swing in the arena of graphical user interface (GUI) development technology in Java platform. The JavaFX library is available as a public Java application programming interface (API). JavaFX contains several features that make it a preferred choice for developing rich client applications:

Behind the JavaFX API lies a number of components to take advantage of the Java native libraries and the available hardware and software. JavaFX components are shown in Figure 1.

Figure 1. Components of the JavaFX platform

Prism is a hardware-accelerated graphics pipeline used for rendering the scene graph. If hardware-accelerated rendering is not available on the platform, Java 2D is used as the fallback rendering mechanism. For example, before using Java 2D for rending, it will try using DirectX on Windows and OpenGL on Mac Linux and embedded platforms.

The media engine is responsible for providing media support in JavaFX, for example, playing back audios and videos. It takes advantage of the available codecs on the platform. The media engine uses a separate thread to process media frames and uses the JavaFX Application Thread to synchronize the frames with the scene graph. The media engine is based on GStreamer, which is an open source multimedia framework.

The first version of JavaFX was released in the fourth quarter of 2008. The current release for JavaFX is version 8.0. The version number jumped from 2.2 to 8.0. From Java 8, the version numbers of Java SE and JavaFX will be the same. The major versions for Java SE and JavaFX will be released at the same time as well. Table 1-1 contains a list of releases of JavaFX. Starting with the release of Java SE 8, JavaFX is part of the Java SE runtime library. From Java 8, you do not need any extra set up to compile and run your JavaFX programs.

You need to have the following software installed on your computer:

It is not necessary to have the NetBeans IDE to compile and run the programs in my blog. However, the NetBeans IDE has special features for creating, running, and packaging JavaFX applications to make developers’ lives easier. You can use any other IDE, for example, Eclipse, JDeveloper, or IntelliJ IDEA.

All JavaFX classes are packaged in a Java Archive (JAR) file named jfxrt.jar. The JAR file is located in the jre\lib\ext directory under the Java home directory.

The NetBeans IDE automatically includes the JavaFX runtime JAR file in the CLASSPATH when you create a Java or JavaFX project. If you are using an IDE other than NetBeans, you may need to include jfxrt.jar in the IDE CLASSPATH to compile and run a JavaFX application from inside the IDE.

Experienced developers sometimes prefer to look at the source code of the JavaFX library to learn how things are implemented behind the scenes. Oracle provides the JavaFX source code. The Java 8 installation copies the source in the Java home directory. The file name is javafx-src.zip. Unzip the file to a directory and use your favorite Java editor to open the source code.