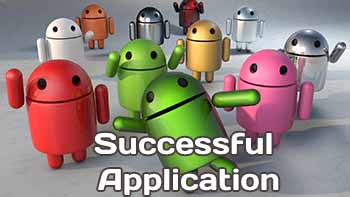 This blog is about design guidelines for writing imaginative and useful Android applications. Several recipes describe specific aspects of successful design. This article will list some others.

One purpose of this article is to explain the benefits of developing native Java Android applications over other methods of delivering rich content on mobile devices.

Requirements of a native handset application

There are a number of key requirements for successfully delivering any mobile handset application, regardless of the platform onto which it will be deployed:

The Android application we will design in my late blog's articles will exploit the features and functions unique to the Android OS platform. In general, the application will be an Activity-based solution allowing independent and controlled access to data on a screen-by-screen basis. This approach helps to localize potential errors and allows sections of the flow to be readily replaced or enhanced independently of the rest of the application.

The Android solution will exploit features inherent to Android devices, supporting the devices’ touch-screen features, the hardware button that allows users to switch the application to the background, and application switching capability.

Android provides the ability to jump back into an application at the point where it was switched out. This will be supported, when possible, within this design.

The application will use only standard Android user interface controls to make it as portable as possible. The use of themes or custom controls is outside the scope of this article.

The application will be designed such that it interfaces to a thin layer of RESTful web services that provide data in a JSON format. This interface will be the same as the one used by the Apple iPhone, as well as applications written for other platforms.

The application will adopt the Android style and design guidelines wherever possible so that it fits in with other Android applications on the device.

A number of important device characteristics should be considered, as discussed in the following subsections.

In order to categorize devices by their screen type, Android defines two characteristics for each device: screen size (the physical dimensions of the screen) and screen density (the physical density of the pixels on the screen, or dpi [dots per inch]). To simplify all the different types of screen configurations, the Android system generalizes them into select groups that make them easier to target.

The designer should take into account the most appropriate choices for screen size and screen density when designing the application.

Many devices provide a different type of user input mechanism, such as a hardware keyboard, a trackball, or a five-way navigation pad. If your application requires a particular kind of input hardware, you must declare it in the AndroidManifest.xml file, and be aware that the Google Play Store will not display your app on devices that lack this feature. However, it is rare for an application to require a certain input configuration.

There are many hardware and software features that may or may not exist on a given Android-powered device, such as a camera, a light sensor, Bluetooth capability, a certain version of OpenGL, or the fidelity of the touch screen. You should never assume that a certain feature is available on all Android-powered devices (other than the availability of the standard Android library).

A sophisticated Android application will use both types of menus provided by the Android framework, depending on the circumstances:

The commands on the context menu that appear when you long-press on an item should be duplicated in the Activity you get to by a normal press on that item.

It is not a good idea to interface directly to any third-party data source; for example, it would be a bad idea to use a Type 3 JDBC driver in your mobile application to talk directly to a database on your server. The normal approach would be to mediate the data, from several sources in potentially multiple data formats, through middleware, which then passes data to an application through a series of RESTful web service APIs in the form of JSON data streams.

Typically, data is provided in such formats as XML, SOAP, or some other XML-derived representation. Representations such as SOAP are heavyweight, and as such, transferring data from the backend servers in this format increases development time significantly as the responsibility of converting this data into something more manageable falls on either the handset application or an object on the middleware server.