Using the StringBuilder Class in Java 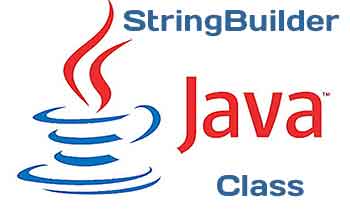 A small program can create a lot of String objects very quickly. For example, how many do you think this piece of code creates?

This sequence of events continues, and after 26 iterations through the loop, a total of 27 objects are instantiated, most of which are immediately eligible for garbage collection.

This is very inefficient. Luckily, Java has a solution. The StringBuilder class creates a String without storing all those interim String values. Unlike the String class, StringBuilder is not immutable.

In this section, we'll look at creating a StringBuilder, common methods, and a comparison to StringBuffer.

We're sure you noticed this from the previous example, but StringBuilder is not immutable. In fact, we gave it 27 different values in the example (blank plus adding each letter in the alphabet). The exam will likely try to trick you with respect to String and StringBuilder being mutable.

Chaining makes this even more interesting. When we chained String method calls, the result was a new String with the answer. Chaining StringBuilder objects doesn't work this way. Instead, the StringBuilder changes its own state and returns a reference to itself! Let's look at an example to make this clearer:

The exam won't always make the code easy to read by only having one method per line. What do you think this example prints?

There are three ways to construct a StringBuilder:

The behind-the-scenes process of how objects are stored isn't on the exam, but some knowledge of this process may help you better understand and remember StringBuilder.

For StringBuilder, Java knows the size is likely to change as the object is used. When StringBuilder is constructed, it may start at the default capacity (which happens to be 16) or one of the programmer's choosing. In the example, we request a capacity of 5. At this point, the size is 0 since no characters have been added yet, but we have space for 5.

Next we add four characters. At this point, the size is 4 since four slots are taken. The capacity is still 5. Then we add three more characters. The size is now 7 since we have used up seven slots. Because the capacity wasn't large enough to store seven characters, Java automatically increased it for us. 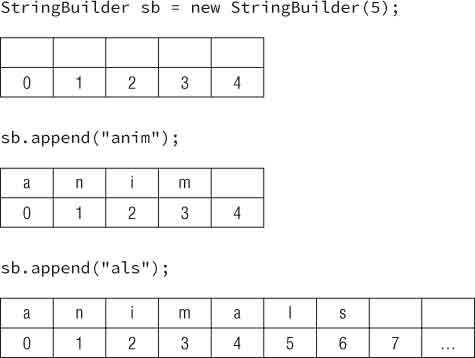 As with String, we aren't going to cover every single method in the StringBuilder class.

These four methods work exactly the same as in the String class. Be sure you can identify the output of this example:

The correct answer is anim 7 s. The indexOf() method calls return 0 and 4, respectively. substring() returns the String starting with index 0 and ending right before index 4.

length() returns 7 because it is the number of characters in the StringBuilder rather than an index. Finally, charAt() returns the character at index 6. Here we do start with 0 because we are referring to indexes. If any of this doesn't sound familiar, go back and read the section on String again.

Notice that substring() returns a String rather than a StringBuilder. That is why sb is not changed. substring() is really just a method that inquires about where the substring happens to be.

Notice that we said one of the method signatures. There are more than 10 method signatures that look similar but that take different data types as parameters. All those methods are provided so you can write code like this:

Nice method chaining, isn't it? append() is called directly after the constructor. By having all these method signatures, you can just call append() without having to convert your parameter to a String first.

The insert() method adds characters to the StringBuilder at the requested index and returns a reference to the current StringBuilder. Just like append(), there are lots of method signatures for different types. Here's one:

Pay attention to the offset in these examples. It is the index where we want to insert the requested parameter.

The delete() method is the opposite of the insert() method. It removes characters from the sequence and returns a reference to the current StringBuilder. The deleteCharAt() method is convenient when you want to delete only one character. The method signatures are as follows:

The following code shows how to use these methods:

After all that, it's time for a nice, easy method. The reverse() method does just what it sounds like: it reverses the characters in the sequences and returns a reference to the current

StringBuilder. The method signature is as follows:

As expected, this prints CBA. This method isn't that interesting. Maybe the exam creators like to include it to encourage you to write down the value rather than relying on memory for indexes.

The last method converts a StringBuilder into a String. The method signature is as follows:

Often StringBuilder is used internally for performance purposes but the end result needs to be a String. For example, maybe it needs to be passed to another method that is expecting a String.

When writing new code that concatenates a lot of String objects together, you should use StringBuilder. StringBuilder was added to Java in Java 5. If you come across older code, you will see StringBuffer used for this purpose. StringBuffer does the same thing but more slowly because it is thread safe. You'll learn about threads for the OCP exam. In theory, you don't need to know about StringBuffer on the exam at all. However, we bring this up anyway, since an older question might still be left on the exam.