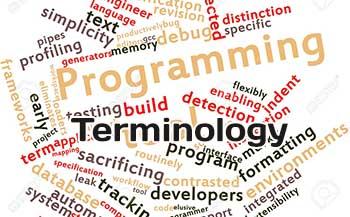 A computer program is a set of instructions that you write to tell a computer what to do. Computer equipment, such as a monitor or keyboard, is hardware, and programs are software. A program that performs a task for a user (such as calculating and producing paychecks, word processing, or playing a game) is application software; a program that manages the computer itself (such as Windows or Linux) is system software. The logic behind any computer program, whether it is an application or system program, determines the exact order of instructions needed to produce desired results. Much of this book describes how to develop the logic to create application software.

The system that uses only 1s and 0s is the binary numbering system. Appendix B describes the binary system in detail. Later in this article, you will learn that bytecode is the name for the binary code created when Java programs are converted to machine language.

Machine language is a low-level programming language, or one that corresponds closely to a computer processor’s circuitry. Low-level languages require you to use memory addresses for specific machines when you create commands. This means that low-level languages are difficult to use and must be customized for every type of machine on which a program runs.

Each high-level language has its own syntax, or rules about how language elements are combined correctly to produce usable statements. For example, depending on the specific high-level language, you might use the verb print or write to produce output. All languages have a specific, limited vocabulary (the language’s keywords) and a specific set of rules for using that vocabulary. When you are learning a computer programming language, such as Java, C++, or Visual Basic, you really are learning the vocabulary and syntax for that language.

Using a programming language, programmers write a series of program statements, similar to English sentences, to carry out the tasks they want the program to perform. Program statements are also known as commands because they are orders to the computer, such as "output this word” or “add these two numbers.” 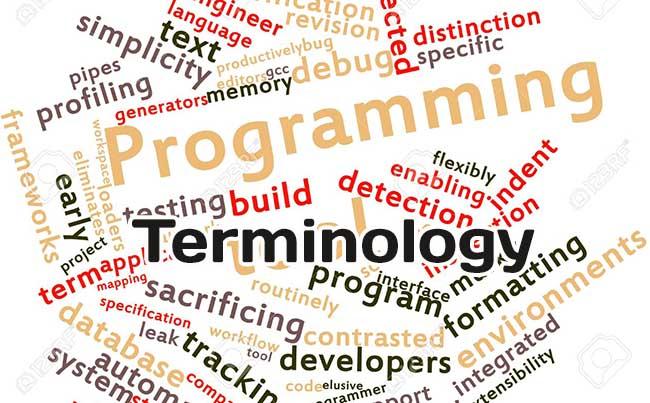 Whether you use a compiler or interpreter often depends on the programming language you use. For example, C++ is a compiled language, and Visual Basic is an interpreted language. Each type of translator has its supporters; programs written in compiled languages execute more quickly, whereas programs written in interpreted languages can be easier to develop and debug. Java uses the best of both technolo­gies: a compiler to translate your programming statements and an interpreter to read the compiled code line by line when the program executes (also called at run time).

Compilers and interpreters issue one or more error messages each time they encounter an invalid program statement—that is, a statement containing a syntax error, or misuse of the language. Examples of syntax errors include misspelling a keyword or omitting a word that a statement requires. When a syntax error is detected, the programmer can correct the error and attempt another translation. Repairing all syntax errors is the first part of the process of debugging a program—freeing the program of all flaws or errors, also known as bugs. Figure 1-1 illustrates the steps a programmer takes while developing an executable program. 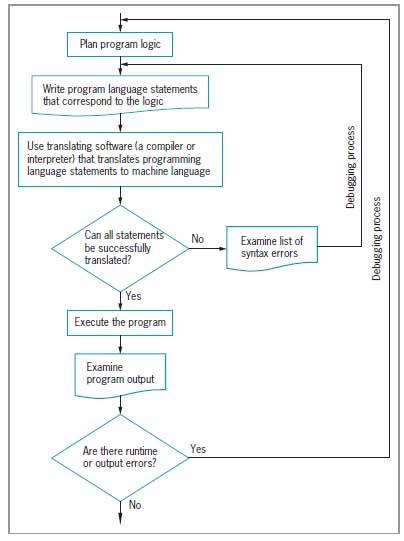 As Figure 1-1 shows, you might write a program with correct syntax that still contains logic errors. A logic error is a bug that allows a program to run, but that causes it to operate incorrectly. Correct logic requires that all the right commands be issued in the appropriate order. Examples of logic errors include multiplying two values when you meant to divide them or producing output prior to obtaining the appropriate input. When you develop a program of any significant size, you should plan its logic before you write any program statements.

Correcting logic errors is much more difficult than correcting syntax errors. Syntax errors are discovered by the language translator when you compile a program, but a program can be free of syntax errors and execute while still retaining logic errors. Often you can identify logic errors only when you examine a program’s output. For example, if you know an employee’s paycheck should contain the value $4,000, but when you examine a payroll program’s output you see that it holds $40, then a logic error has occurred. Perhaps an incorrect calculation was performed, or maybe the hours worked value was output by mistake instead of the net pay value. When output is incorrect, the programmer must carefully examine all the statements within the program, revise or move the offending statements, and translate and test the program again.

Just because a program produces correct output does not mean it is free from logic errors. For example, suppose that a program should multiply two values entered by the user, that the user enters two 2s, and the output is 4. The program might actually be adding the values by mistake. The programmer would discover the logic error only by entering different values, such as 5 and 7, and examining the result.

In each “Two Truths & a Lie" section, two of the numbered statements are true, and one is false. Identify the false statement and explain why it is false.