Oracle's Regular Expression in SQL and PL/SQL by examples 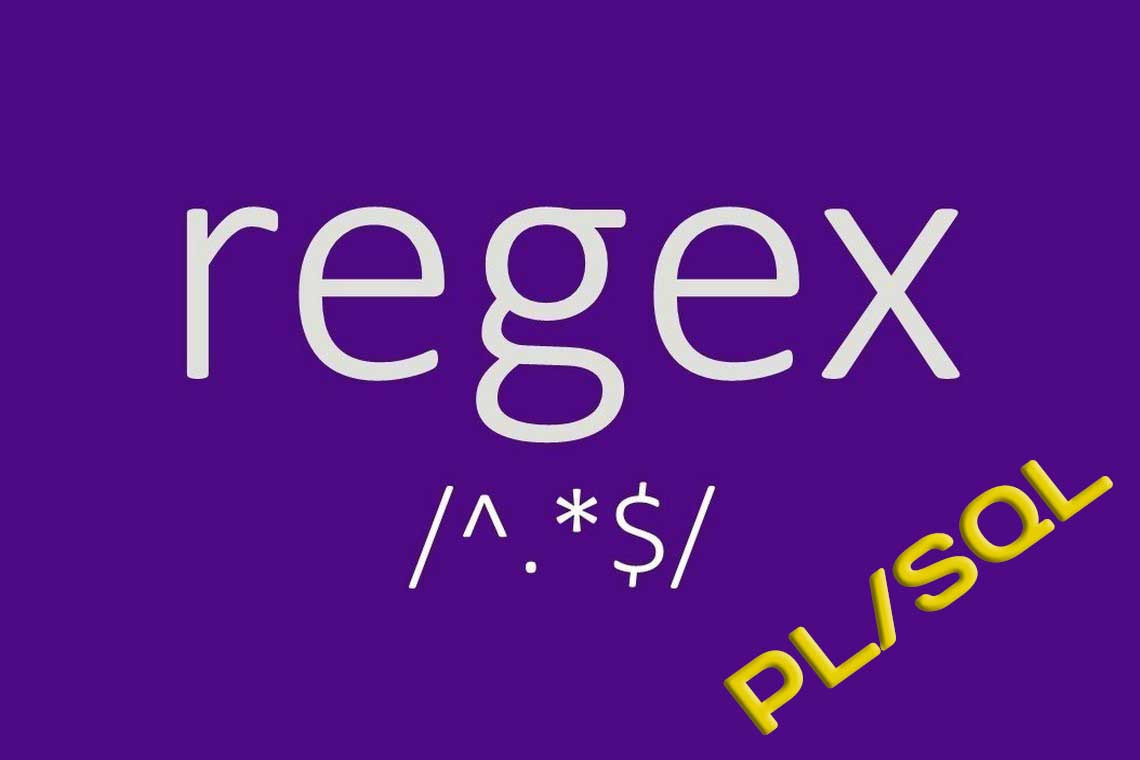 Oracle's regular expression support manifests itself in the form of three SQL functions and one predicate that you can use to search and manipulate text in any of Oracle's supported text datatypes: VARCHAR2, CHAR, NVARCHAR2, NCHAR, CLOB, and NCLOB.

Regular expression support does not extend to LONG, because LONG is supported only for backward compatibility with existing code.

Following are the four functions you'll use to work with regular expressions in Oracle:

Locates, by character position, an occurrence of text matching a regular expression.

Of these, you've already seen REGEXP_LIKE in quite a few examples. REGEXP_LIKE is documented in the "Conditions" chapter of the Oracle Database 10g SQL Reference because in SQL it can only be used as a predicate in the WHERE and HAVING clauses of a query or DML statement. In PL/SQL, however, you can use REGEXP_LIKE as you would any other Boolean function:

The remaining three functions work identically in SQL and PL/SQL.

Oracle is notable for its Globalization Support in that it supports an exceedingly wide variety of character sets, languages, territories, and linguistic sorts. Regular expressions are no exception. The combination of character set, language, and territory is known as a locale. Oracle's regular expression engine respects locale, and is configurable via NLS (National Language Support) parameter settings.

Following are some notable examples of the way in which regular expression locale support affects you:

Whether matching is case-sensitive

NLS_SORT controls whether matching is case-sensitive by default, which it usually will be. You can override the default on a per-call basis.

Whether the period (.) matches newline characters

By default, periods do not match newline characters (occurrences of CHR(10) on Unix systems) in the source text. You can specify that periods match newlines.

The definition of "line"

By default, the source string that you are searching is considered one long line, and the caret (^) and dollar sign ($) match only the beginning and ending of the entire string.

You can specify that the source value is to be treated as many lines delimited by newline characters. If you do so, then the ^ and $ match the beginning and end of each line respectively.

To specify multiple parameters, simply list them in one string. For example, to request case-insensitive matching with periods matching newline characters, specify 'in' or 'ni' as your match_parameter.

If you specify parameters that are undefined, Oracle will return an ORA-01760: illegal argument for function error.

Oracle's regular expression engine is of the traditional nondeterministic finite automata (traditional NFA) variety, the same type used in Perl, the .NET environment, and Java. With one exception, Oracle's engine implements the syntax and behavior for extended regular expressions (EREs) as described in the POSIX standard. In addition, Oracle adds support for backreferences.

The regular expression syntax and behavior documented in the Open Group Base Specifications Issue 6, IEEE Standard 1003.1, 2003 Edition is the same as that for POSIX. You can view the Open Group specifications at http://www.opengroup.org/onlinepubs/007904975/basedefs/xbd_chap09.html

The one exception that stands between Oracle and full POSIX compliance is that Oracle does not attempt to determine the longest possible match for a pattern containing variations, as the standard requires. The following example demonstrates this very well:

Do not confuse finding the longest possible match out of several alternations with greediness.

Like many regular expression engines, Oracle ignores the "longest possible match" rule, because the overhead of computing all possible permutations and then determining which is the longest can be excessive.

Differences Between Perl and Oracle

This section is based a comparison of Perl Version 5.8 with Oracle Database 10g.

Regular expressions are often written as string literals. When you move string literals from one language to another, you may encounter issues with the way that each language handles such literals.

For example, Perl enables you to to use \x followed by two hexadecimal digits to embed arbitrary byte codes within a string. Perl also supports character sequences such as \n for the newline (linefeed on Unix) character. Thus, in Perl, you can write the following regular expression to search for either a linefeed or a space:

Another issue you may encounter is Perl's use of the dollar sign ($) to dereference a variable within a string. In Perl, the expression /a$b/ searches for the letter 'a' followed by the contents of the Perl variable named b. Perl's regular expression never sees the '$b', because Perl substitutes the value of the variable before it passes the string to the engine.

Neither SQL nor PL/SQL support the use of \ and $ in the way that Perl does. Because Perl and Oracle differ in their handling of string literals, you may not be able to take a regular expression developed for Perl and simply drop it into Oracle. Before attempting to move an expression in the form of a string literal from Perl to Oracle, make sure that the "expression" doesn't contain any characters that Perl itself interprets.

Unlike Perl and many database products, Oracle treats an empty string as a NULL value. Thus, the following query, which attempts to match an empty string, brings back no data:

In Oracle, the regular expression engine does not see an empty string; rather, it sees a NULL, or the complete absence of an expression with which to do any matching.

Oracle's regular expression syntax is POSIX-compliant. Perl's engine supports a number of operators, character classes, and so forth that are not defined as part of the POSIX standard. These are described in Table 1-2. Where possible, we also specify a POSIX equivalent that's usable in Oracle.

The POSIX equivalents shown in Table 1-2 should work for the default locale (American_America.US7ASCII, with a BINARY sort). However, we have not yet been able to run exhaustive tests.

Syntax Perl does not support

Both Perl and Oracle support the POSIX-compliant caret (^) as the first character within a bracket expression to mean all characters except those listed within the expression. For example, you can write: [^A-Z] to match on any character but the uppercase letters.

Perl also supports the use of a caret in conjunction with a character class name. For example, Perl allows you to write [[:^digit:]] to match on any character except for one in the [:digit:] class. You can get the same effect in Oracle using the form: [^[:digit:]].

Quantifiers in a regular expression will match as many characters as possible. For example, given a source string of '123456', the expression [0-9]+ will match the entire string of six digits.

Perl supports the addition of a question mark (?) to the end of a quantifier to make it non-greedy, or lazy, in which case the quantifier matches the minimum number of characters possible. For example, the expression [0-9]+? matches only the first digit of the string '123456'.

The complete list of lazy quantifiers supported by Perl is:

POSIX, and by extension Oracle, does not support these quantifiers.

In a replacement string such as one you might use with REGEXP_REPLACE, Perl supports the use of a dollar sign ($) to indicate a backreference. For example, you can use $1 to refer to the first subexpression. Oracle supports only the backslash syntax \1, \2, and so forth.

POSIX and Perl differ somewhat in how they handle backslash (\) characters:

\ as the last character of an expression

Use \ as the last character of a regular expression in Perl, and you get an error. Do the same thing in Oracle, and the trailing \ is silently ignored.