How to connect to Oracle Database 12C 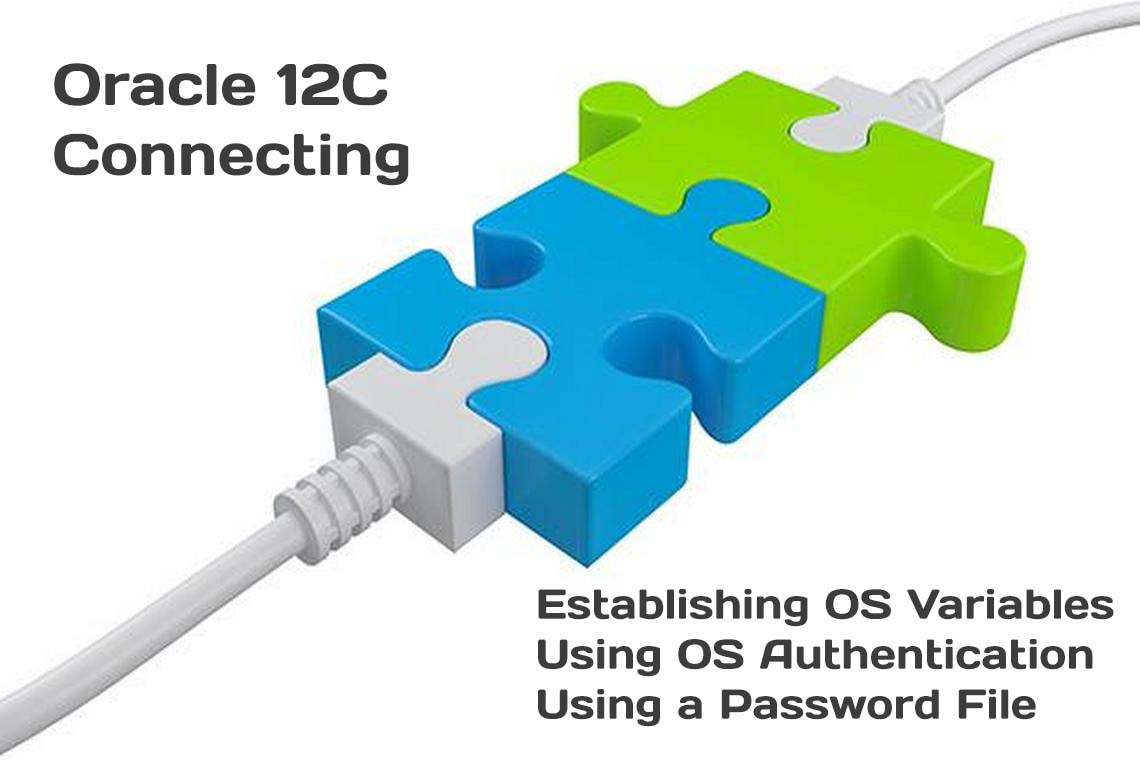 Prior to connecting to your Oracle Database 12C, you must establish the required operating system variables. Additionally, if you’re going to run backup and recovery commands, you need access to either a privileged operating system (OS) account or a database user who has been granted the appropriate privileges (via a password file). These topics are discussed in the following subsections.

Before connecting to your database via SQL*Plus, RMAN, Data Pump (or any other Oracle utility), you must first set several OS variables:

The ORACLE_HOME variable is important because it defines the starting point directory for locating the Oracle binary files (such as sqlplus, dbca, netca, rman, and so on) that are located in ORACLE_HOME/bin.

The ORACLE_SID (site identifier) variable defines the default name of the database you’ll connect to. ORACLE_SID is also used to establish the default name for the parameter file, which is init<ORACLE_SID>.ora or spfile<ORACLE_SID>.ora. By default, Oracle will look in ORACLE_HOME/dbs for these initialization files on Linux/Unix systems and ORACLE_HOME\database on Windows systems. The initialization file contains parameters that govern aspects of your database, such as how much memory to allocate to your database, the maximum number of connections, and so on.

The LD_LIBRARY_PATH variable is important because it specifies where to search for libraries on Linux/Unix boxes. The value of this variable is typically set to include ORACLE_HOME/lib.

The PATH variable specifies which directories are looked in by default when you type a command from the OS prompt. In almost all situations, ORACLE_HOME/bin (the location of the Oracle binaries) must be included in your PATH variable.

In Linux/Unix, when you’re using the Bourne, Bash, or Korn shell, you can set OS variables manually from the OS command line with the following export command:

Note that the prior commands are for my particular development environment; you’ll need to adjust those to match the Oracle home and database name used in your environment.

For the C or tcsh shell, use the setenv command to set variables:

Another way that DBAs set these variables is by placing the previous export or setenv commands into a Linux/Unix startup file, such as .bash_profile, .bashrc, or .profile. That way, the variables are automatically set upon login.

A much better method for setting OS variables is use of a script that uses a file that contains the names of all Oracle databases on a server and their associated Oracle homes. This approach is flexible and maintainable. For instance, if a database’s Oracle home changes (e.g., after an upgrade), you only have to modify one file on the server and not hunt down where the Oracle home variables may be hard-coded into scripts.

Oracle provides a mechanism for automatically setting the required OS variables. This approach relies on two files: oratab and oraenv.

The oratab file is used in Linux/Unix environments for the following purposes:

The oratab file has three columns with this format:

The Y or N indicates whether you want Oracle to restart automatically on reboot of the box; Y indicates yes, and N indicates no (the automatic restart feature requires additional tasks not covered in this article).

Comments in the oratab file start with a pound sign (#). Here is a typical oratab file entry:

The names of the databases on the previous lines are O12C and ORA12CR1. The path of each database’s Oracle home directory is next on the line (separated from the database name by a colon [:]).

The oraenv tool is discussed in the following section.

If you don’t properly set the required OS variables for an Oracle environment, then utilities such as SQL*Plus, RMAN, Data Pump, and so on won’t work correctly. The oraenv utility automates the setting of required OS variables (such as ORACLE_HOME, ORACLE_SID, and PATH) on an Oracle database server. This utility is used in Bash, Korn, and Bourne shell environments (if you’re in a C shell environment, there is a corresponding coraenv utility).

And then you can run oraenv manually, like this:

You can also run the oraenv utility non-interactively by setting OS variables before you run it. This is useful for scripting when you don’t want to be prompted for input:

Note  In Windows the operating system, variables are set in the registry.

You can verify that the OS variable settings with the echo command, for example:

After you’ve established your operating system variables, you need to connect to the database with the proper privileges. You can do this in one of two ways: using OS authentication or using a password file.

On Windows, the OS user must be part of either the ora_dba group or the ora_oper group. In Windows environments, you can verify which OS users belong to the ora_dba group as follows: select Control Panel ⇒ Administrative Tools ⇒ Computer Management ⇒ Local Users and Groups Groups. You should see a group named something like ora_dba. You can click that group and view which OS users are assigned to it. Additionally, for OS authentication to work in Windows environments, you must have the following entry in your sqlnet.ora file:

On Linux/Unix, you can quickly verify the operating system groups that your account belongs to using the id command without any parameters:

No username or password is required when using OS authentication (hence just the slash without a user/password) because Oracle first checks to see if the OS user is a member of a privileged OS group, and if so, connects without checking the username/password. You can verify that you have connected as SYS by issuing the following:

The privileged OS groups are established when installing the Oracle software. There are a few OS groups that pertain to backup and recovery:

Table 1. Mapping of OS Groups to Privileges Related to Backup and Recovery

If you aren’t using OS authentication, then you can use a password file to connect to the database as a privileged user. A password file allows you to do the following from SQL*Plus or RMAN:

The password file must be manually created with the orapwd utility and is populated via the SQL grant command. To implement a password file, perform the following steps:

In a Linux/Unix environment, use the orapwd utility to create a password file as follows:

n a Linux/Unix environment, the password file is usually stored in the ORACLE_HOME/dbs directory, and in Windows, it’s typically placed in the ORACLE_HOME\database directory. The format of the file name that you specify in the previous command may vary by OS. For example, on Windows the format is PWD<ORACLE_SID>.ora. The following shows the syntax in a Windows environment:

To enable the use of the password file, set the initialization parameter remote_login_passwordfile to exclusive (this is the default value). You can verify its value as shown next:

If need be, you can manually set the remote_login_passwordfile parameter as shown:

You will then need to stop and start your database for this parameter to take effect (more details on stopping/starting your database later in this chapter). The prior example assumes you are using a server parameter file (spfile). If you are not using a spfile, you will have to manually edit the init.ora file by adding this entry with a text editor:

Then stop and start your database to instantiate the parameter. Once the password file is enabled, you can then create database users and assign them the sys* privileges as required. For example, suppose you had a database user named DBA_MAINT that you wanted to grant SYSBACKUP privileges:

The syntax for using a password file to connect to a database is as follows:

For example, using the DBA_MAINT database user, you can connect to the database with SYSBACKUP privileges as follows:

Because you are providing a username/password and attempting to connect with a sys* level privilege (as a non-SYS user), Oracle will verify that a password file is in place (for the local database) and that the supplied username/password is in the password file. You can verify which users have sys* privileges by querying the V$PWFILE_USERS view:

Here is some sample output:

For local connections (made while physically logged on to the database server), operating system authentication takes precedence over password file authentication. In other words, if you’re logged on to an OS account that is a member of an authenticated group, such as dba, it doesn’t matter what you type in for the username and password when connecting to a local database with sys* privileges. For example, you can connect as sysdba with a nonexistent username/password:

Oracle will verify that the username password combination exists in a password file on the remote server that is associated with the database defined by the HATHI net service name. In this example, Oracle uses the information in a local tnsnames.ora file to determine the location of the database on the network (host, port, and database).

Tip  Using a local tnsnames.ora file is known as the local naming connection method. There are other remote database name resolution methods, such as easy connect, directory naming, and external naming. See the Oracle Database Net Services Administrator’s Guide for details on how to implement these.

The easy connect method allows you to connect to a remote database without the need of a tnsnames.ora file (or other methods of resolving the location of the database). If you know the name of the host, server, port, and service name, you can directly enter those on the command line. The syntax is as follows:

For example, assuming the host name is hesta, the port is 1521, and the service name is O12C, then you can connect as follows:

The easy connect method is handy for situations in which you’re troubleshooting connectivity issues or when you don’t have a tnsnames.ora file available (or other ways to resolve the remote connection).