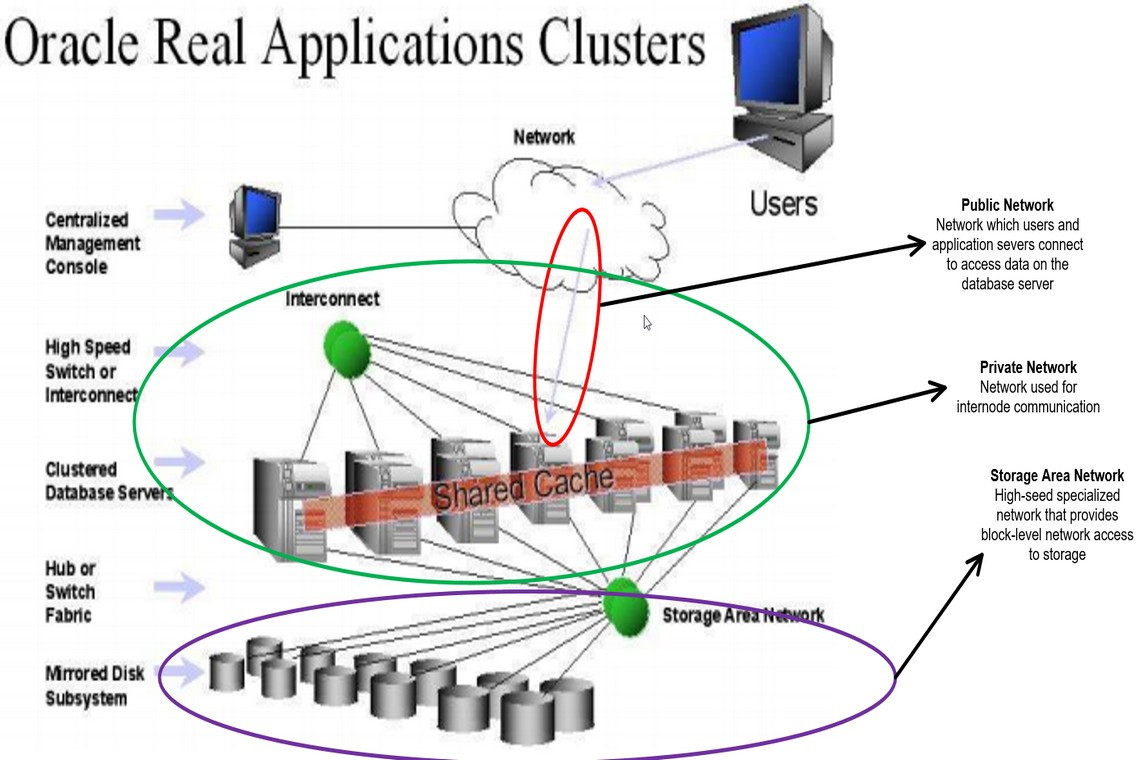 The following sections explain each of these concepts.

A virtual IP is required to ensure that applications can be designed to be highly available. A system needs to eliminate all single points of failure. In Oracle, clients connected to an Oracle RAC database must be able to survive a node failure. Client applications connect to the Oracle instance and access the database through the instance. Therefore, a node failure will bring down the instance to which the client might have connected.

The first design available from Oracle was Transparent Application Failover (TAF). With TAF, a session can fail over to the surviving instances and continue processing. Various limitations exist with TAF; for instance, only query failover is supported. Also, to achieve less latency in failing over to the surviving node, Oracle tweaked the TCP timeout (platform dependent; defaults to 10 minutes in most UNIX ports). It wouldn’t be a good idea to design a system in which a client takes 10 minutes to detect that there is no response from the node to which it has connected.

To address this, Oracle uses a feature called the cluster VIP—a cluster virtual IP address that would be used by the outside world to connect to the database. This IP address needs to be different from the set of IP addresses within the cluster. Traditionally, listeners would be listening on the public IP of the box and clients would contact the listeners on this IP. If the node dies, the client would take the TCP timeout value to detect the death of the node. Each node of the cluster has a VIP configured in the same subnet of the public IP. A VIP name and address must be registered in the DNS in addition to the standard static IP information. Listeners would be configured to listen on VIPs instead of the public IP.

When a node is down, the VIP is automatically failed over to one of the other nodes. During the failover, the node that gets the VIP will “re-ARP” to the world, indicating the new MAC address of the VIP. Clients who have connected to this VIP will immediately get a reset packet sent. This results in clients getting errors immediately rather than waiting for the TCP timeout value. When one node goes down in a cluster and a client is connecting to the same node, the client connection will be refused by the down node, and the client application will choose the next available node from the descriptor list to get a connection. Applications need to be written so that they catch the reset errors and handle them. Typically for queries, applications should see an ORA-3113 error.

In computer networking, the Address Resolution Protocol (ARP) is the method of finding the host’s hardware addresses (MAC address) when only the IP address is known. The hosts use ARP when they want to communicate with each other in the same network. ARP is also used by routers to forward a packet from one host through another router. In cluster VIP failovers, the new node that gets the VIP advertises the new ARP address to the world. This is typically known as gratuitous ARP, and during this operation, the old hardware address is invalidated in the ARP cache, and all the new connections will get the new hardware address.

SCAN is a single network name that resolves to three different IP addresses registered either in DNS or GNS. During installation of Oracle Grid Infrastructure, Oracle creates three SCAN listeners and SCAN VIPs. If Grid Name Server (GNS) is not used, then SCAN must be registered in DNS before installation of the Oracle Grid Infrastructure. Oracle fails over the SCAN VIP and the listener to another node in case of failure. Each database instance registers itself to the local listener and the SCAN listener using the database initialization parameter REMOTE_LISTENER, because this is the only way the SCAN listener knows about the location of the database instances. The SRVCTL utility can be used to manage and monitor the SCAN resources in the cluster.

SCAN allows users to connect to the database in the cluster using the EZconnect or jdbc thin driver, as shown here:

Oracle provides self-management of the network requirements of the cluster by supporting Dynamic Host Configuration Protocol (DHCP) for private interconnect and virtual IP addresses. Oracle needs an optimized way to resolve the IP address to a name; hence, it developed its own Grid Name Service, which is linked to the Domain Name Service and allows users to connect to the cluster and the databases in the cluster. Oracle uses a dedicated subdomain and a virtual IP GNS (aka GNS VIP) that is registered in the DNS. Each cluster will have its own GNS, GNS virtual IP, and a dedicated subdomain, and the subdomain will forward all requests for addresses in the subdomain to the GNS virtual IP. Oracle fails over the GNS and GNS virtual IP to another node in case of node failure.

When using GNS and DHCP, Oracle obtains the virtual IP address from the DHCP server and configures the SCAN name during cluster configuration. Oracle dynamically obtains new IP addresses from the DHCP server and configures the cluster resource whenever a node joins the cluster. Oracle does not use DHCP for the GNS VIP for obvious reasons—it must be known to the cluster prior to the Oracle Grid Infrastructure being installed.

Oracle requires each cluster node to have at least two network interface cards—one for the public network and one for the private network. Four are preferred when bonded and for HA. Otherwise, single interfaces are a point of failure unless one creates a VLAN on the two interfaces bonded and exposes it as a separate interface name associated with each network. The interface cards must be the same on all cluster nodes in an Oracle cluster. The network interface card for the public network must support TCP/IP and must have a valid IP address and an associated hostname registered in the domain name server.

You can complete the Oracle Grid Infrastructure installation by just registering the hostname in the /etc/hosts file; however, it is strongly recommended for an associated hostname to be registered in the domain name server. The network interface card for the private network must support UDP (User Datagram Protocol). Performance of the Oracle Real Application Cluster depends on the speed of the private network; hence, a high-speed network interface card such as 10 Gigabit Ethernet Network Card is recommended.

The cluster interconnect is another important component in Oracle RAC. It is a communication path used by the cluster for the synchronization of resources and is also used in some cases for the transfer of data from one instance to another. Typically, the interconnect is a network connection that is dedicated to the server nodes of a cluster (and thus is sometimes referred to as a private interconnect) and has a high bandwidth and low latency. Different hardware platforms and different clustering software have different protocol implementations for the high-speed interconnect.

Table 1 lists the various interconnects used by the implementations based on the clusterware used and the network hardware. Using vendor-specific interconnects is often discouraged by Oracle because they make troubleshooting more complex compared with the standard open-system protocols. 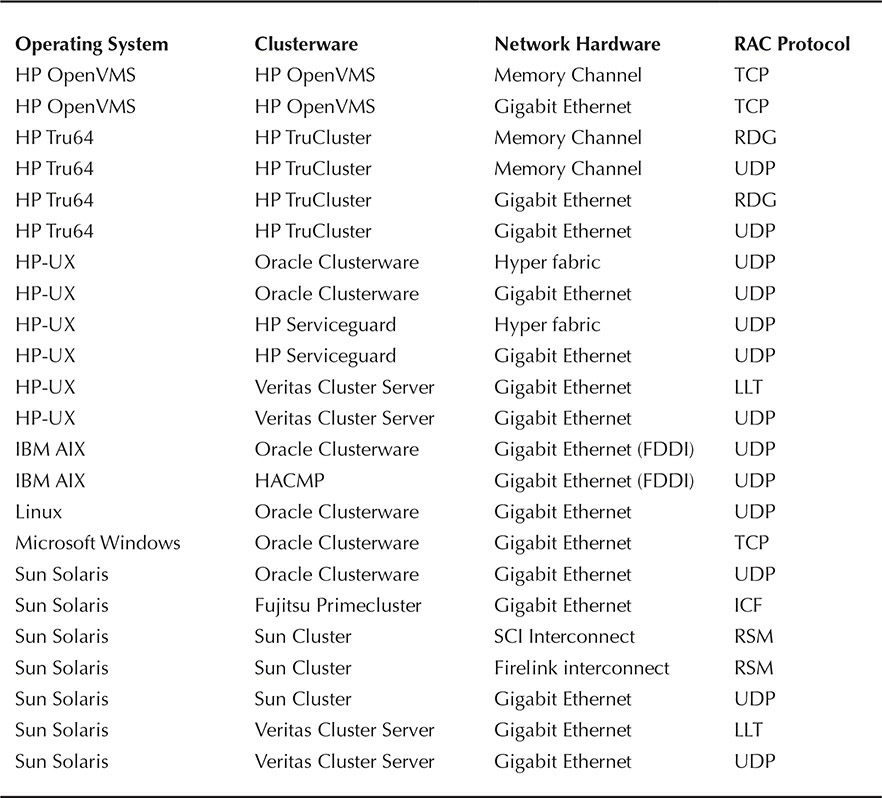 TABLE 1. Interconnects Based on Clusterware and Hardware

In addition to the interconnects described in this table, newer interconnects such as Reliable Datagram Sockets (RDG) over InfiniBand can provide a horizontally scalable, high-speed, low-latency alternative to traditional vertical scaling.

At the network level, a failure in a NIC can cause an outage in the cluster, especially if the failure occurs at the interface on which the interconnect is configured. To achieve high availability at this layer, network bonding is recommended. Bonding allows a node to see multiple physical NICs as a single logical unit.

The basic requirement of an interconnect is to provide reliable communication between nodes, but this cannot be achieved by a crossover cable between the nodes. However, using a crossover cable as the interconnect may be appropriate for development or demonstration purposes. Substituting a normal crossover cable is not officially supported in production Oracle RAC implementations for the following reasons:

Time on each cluster node must be synchronized because different time stamps on the cluster nodes can lead to false node eviction in the cluster. All operating systems provide a Network Time Protocol feature that must be configured and used before the Oracle Grid Infrastructure is installed.

In the Oracle RAC environment, server nodes communicate with each other using high-speed private interconnects. A high-speed interconnect is a redundant network that is exclusively used for inter-instance communication and some data block traffic. A split-brain situation occurs when all the links of the private interconnect fail to respond to each other, but the instances are still up and running. Therefore, each instance thinks that the other instances are dead, and that it should take over the ownership.

In a split-brain situation, instances independently access the data and modify the same blocks, and the database will end up with changed data blocks overwritten, which could lead to data corruption. To avoid this, various algorithms have been implemented.

In the Oracle RAC environment, the Instance Membership Recovery (IMR) service is one of the efficient algorithms used to detect and resolve the split-brain syndrome. When one instance fails to communicate with the other instance, or when one instance becomes inactive for some reason and is unable to issue the control file heartbeat, the split-brain situation is detected and the detecting instance will evict the failed instance from the database. This process is called node eviction. Detailed information is written in alert log and trace files.