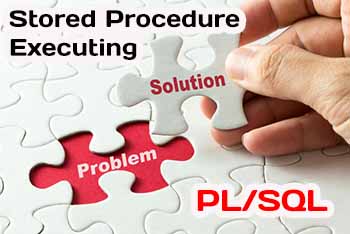 You want to execute a stored procedure from SQL*Plus.

Open SQL*Plus, and connect to the database schema that contains the procedure you are interested in executing. Execute the procedure by issuing the following command:

For instance, to execute the procedure that was created in this blog, you would issue the following command:

This would invoke the INCREASE_WAGE procedure, passing three parameters: EMPLOYEE_ID, a percentage of increase, and an upper salary bound.

You can also execute a stored procedure by creating a simple anonymous block that contains the procedure call, as depicted in the following code:

Using this technique, invoking the stored procedure  would resemble the following:

Both techniques work equally well, but the latter would be better to use if you wanted to execute more than one procedure or follow up with more PL/SQL statements. If you are running a single procedure from SQL*Plus, then using EXEC is certainly a good choice.

A stored procedure can be executed using the EXEC keyword. You can also type EXECUTE entirely. Both the long and shortened versions will work.

It is also possible to execute a procedure that is contained within other schemas, if the current user has execute privileges on that procedure. In such a scenario, use dot notation to qualify the procedure name. Here's an example:

A procedure can also be invoked from within another procedure by simply typing the name and placing the parameters inside parentheses, if there are any. For instance, this blog.