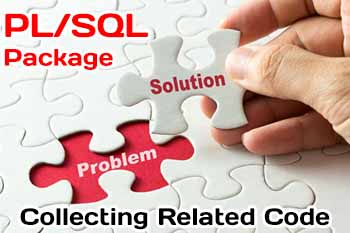 You have a number of procedures and functions that formulate an entire application when used together. Rather than defining each subprogram individually, you prefer to combine all of them into a single, logically related entity.

The following example shows the creation of a PL/SQL package containing two procedures and a variable.

First, you create the package specification:

The specification lists the procedures, functions, and variables that you want to be visible from outside the package. Think of the specification as the external interface to your package.

Next, create the package body:

A PL/SQL package can be useful for organizing code into a single construct. Usually the code consists of a grouping of variables, types, cursors, functions, and procedures that perform actions that are logically related to one another. Packages consist of a specification and a body, both of which are stored separately in the data dictionary. The specification contains the declarations for each of the variables, types, subprograms, and so on, that are defined in the package. The body contains the implementations for each of the subprograms and cursors that are included in the specification, and it can also include implementations for other functions and procedures that are not in the specification. You'll learn more about this in other recipes.

Note Global variables should be used wisely. The use of global variables can complicate matters when tracking down problems or debugging your code. If global variables are used, then it can be hard to determine where values have been set and where initialization of such variables occurs. Following the rules of encapsulation and using local variables where possible can make your life easier.

You can change any implementations within a package body without recompiling the specification. This becomes very important when you have other objects in the database that depend on a particular package because it is probably not a good idea to change a package specification during normal business hours when a package is in use by others. Doing so may result in unusable objects, and the package users could begin to see errors. However, if changes need to be made to the code within the package body, then you can change that code without affecting public-facing constructs of a package.

Packages are one of the most important constructs that you can create in PL/SQL. You will use packages to combine common code objects for almost any significant application that you write. It is possible to create entire applications without the use of a package, but doing so can create a maintenance nightmare because you will begin to see a pool of procedures and functions being created within your database, and it will be difficult to remember which constructs are used for different tasks. Packages are especially handy when writing PL/SQL web applications.