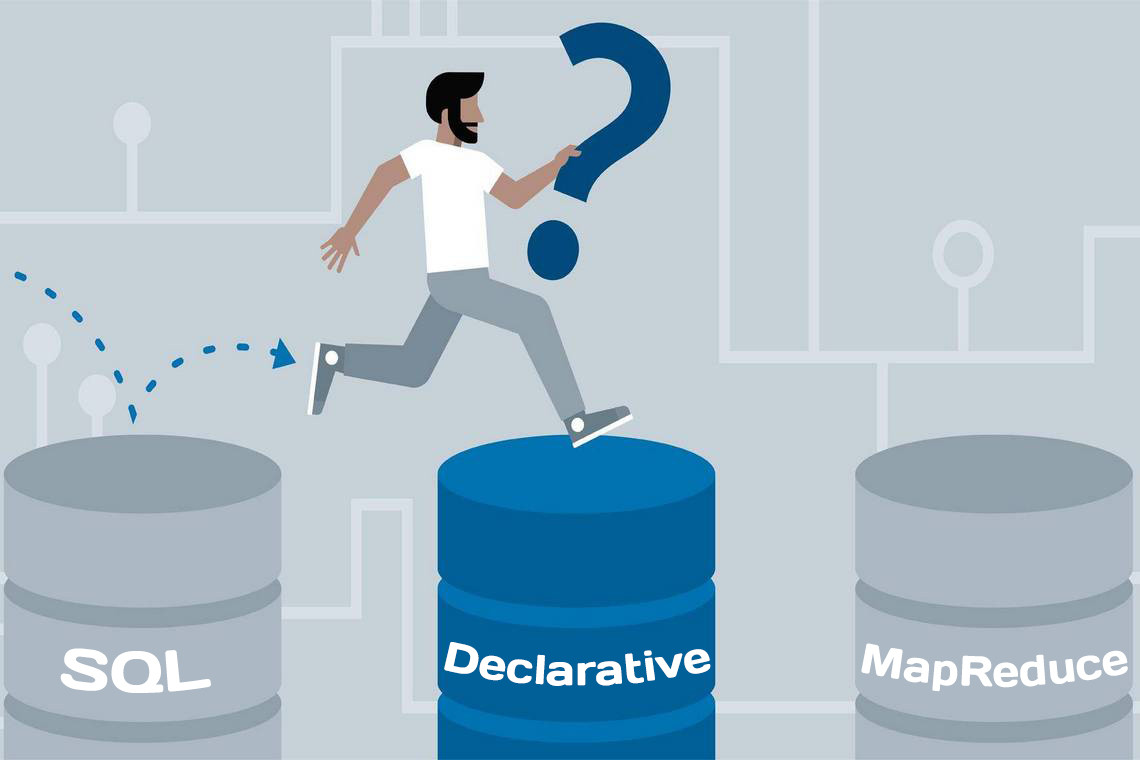 When the relational model was introduced, it included a new way of querying data: SQL is a declarative query language, whereas IMS and CODASYL queried the database using imperative code. What does that mean?

In the relational algebra, you would instead write:

where σ (the Greek letter sigma) is the selection operator, returning only those animals that match the condition family = “Sharks”.

When SQL was defined, it followed the structure of the relational algebra fairly closely:

An imperative language tells the computer to perform certain operations in a certain order. You can imagine stepping through the code line by line, evaluating conditions, updating variables, and deciding whether to go around the loop one more time.

In a declarative query language, like SQL or relational algebra, you just specify the pattern of the data you want - what conditions the results must meet, and how you want the data to be transformed (e.g., sorted, grouped, and aggregated) - but not how to achieve that goal. It is up to the database system’s query optimizer to decide which indexes and which join methods to use, and in which order to execute various parts of the query.

A declarative query language is attractive because it is typically more concise and easier to work with than an imperative API. But more importantly, it also hides implementation details of the database engine, which makes it possible for the database system to introduce performance improvements without requiring any changes to queries.

For example, in the imperative code shown at the beginning of this section, the list of animals appears in a particular order. If the database wants to reclaim unused disk space behind the scenes, it might need to move records around, changing the order in which the animals appear. Can the database do that safely, without breaking queries?

The SQL example doesn’t guarantee any particular ordering, and so it doesn’t mind if the order changes. But if the query is written as imperative code, the database can never be sure whether the code is relying on the ordering or not. The fact that SQL is more limited in functionality gives the database much more room for automatic optimizations.

Finally, declarative languages often lend themselves to parallel execution. Today, CPUs are getting faster by adding more cores, not by running at significantly higher clock speeds than before. Imperative code is very hard to parallelize across multiple cores and multiple machines, because it specifies instructions that must be performed in a particular order. Declarative languages have a better chance of getting faster in parallel execution because they specify only the pattern of the results, not the algorithm that is used to determine the results. The database is free to use a parallel implementation of the query language, if appropriate.

Declarative Queries on the Web

The advantages of declarative query languages are not limited to just databases. To illustrate the point, let’s compare declarative and imperative approaches in a completely different environment: a web browser.

Say you have a website about animals in the ocean. The user is currently viewing the page on sharks, so you mark the navigation item “Sharks” as currently selected, like this:

Now say you want the title of the currently selected page to have a blue background, so that it is visually highlighted. This is easy, using CSS:

Here the CSS selector li.selected > p declares the pattern of elements to which we want to apply the blue style: namely, all <p> elements whose direct parent is an <li> element with a CSS class of selected. The element <p>Sharks</p> in the example matches this pattern, but <p>Whales</p> does not match because its <li> parent lacks class="selected".

If you were using XSL instead of CSS, you could do something similar:

Here, the XPath expression li[@class='selected']/p is equivalent to the CSS selector li.selected > p in the previous example. What CSS and XSL have in common is that they are both declarative languages for specifying the styling of a document.

Imagine what life would be like if you had to use an imperative approach. In JavaScript, using the core Document Object Model (DOM) API, the result might look something like this:

This JavaScript imperatively sets the element <p>Sharks</p> to have a blue background, but the code is awful. Not only is it much longer and harder to understand than the CSS and XSL equivalents, but it also has some serious problems:

MapReduce is a programming model for processing large amounts of data in bulk across many machines, popularized by Google. A limited form of MapReduce is supported by some NoSQL datastores, including MongoDB and CouchDB, as a mechanism for performing read-only queries across many documents.

For now, we’ll just briefly discuss MongoDB’s use of the model.

MapReduce is neither a declarative query language nor a fully imperative query API, but somewhere in between: the logic of the query is expressed with snippets of code, which are called repeatedly by the processing framework. It is based on the map (also known as collect) and reduce (also known as fold or inject) functions that exist in many functional programming languages.

To give an example, imagine you are a marine biologist, and you add an observation record to your database every time you see animals in the ocean. Now you want to generate a report saying how many sharks you have sighted per month.

The date_trunc('month', timestamp) function determines the calendar month containing timestamp, and returns another timestamp representing the beginning of that month. In other words, it rounds a timestamp down to the nearest month.

The same can be expressed with MongoDB’s MapReduce feature as follows:

For example, say the observations collection contains these two documents:

The map and reduce functions are somewhat restricted in what they are allowed to do. They must be pure functions, which means they only use the data that is passed to them as input, they cannot perform additional database queries, and they must not have any side effects. These restrictions allow the database to run the functions anywhere, in any order, and rerun them on failure. However, they are nevertheless powerful: they can parse strings, call library functions, perform calculations, and more.

MapReduce is a fairly low-level programming model for distributed execution on a cluster of machines. Higher-level query languages like SQL can be implemented as a pipeline of MapReduce operations, but there are also many distributed implementations of SQL that don’t use MapReduce. Note there is nothing in SQL that constrains it to running on a single machine, and MapReduce doesn’t have a monopoly on distributed query execution.

Being able to use JavaScript code in the middle of a query is a great feature for advanced queries, but it’s not limited to MapReduce - some SQL databases can be extended with JavaScript functions too.

A usability problem with MapReduce is that you have to write two carefully coordinated JavaScript functions, which is often harder than writing a single query. Moreover, a declarative query language offers more opportunities for a query optimizer to improve the performance of a query. For these reasons, MongoDB 2.2 added support for a declarative query language called the aggregation pipeline. In this language, the same shark-counting query looks like this:

The aggregation pipeline language is similar in expressiveness to a subset of SQL, but it uses a JSON-based syntax rather than SQL’s English-sentence-style syntax; the difference is perhaps a matter of taste. The moral of the story is that a NoSQL system may find itself accidentally reinventing SQL, albeit in disguise.