A Brief History of SQL 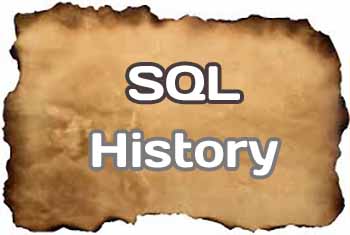 Dr. Edgar F. Codd (1923–2003), an IBM research scientist, first conceived the relational database model in 1969. He was looking into new ways to handle large amounts of data in the late 1960s and began thinking of how to apply mathematical principles to solve the myriad problems he had been encountering.

After Dr. Codd presented the relational database model to the world in 1970, organizations such as universities and research laboratories began efforts to develop a language that could be used as the foundation of a database system that supported the relational model. Initial work led to the development of several different languages in the early to mid-1970s. One such effort occurred at IBM’s Santa Teresa Research Laboratory in San Jose, California.

IBM began a major research project in the early 1970s called System/R, intending to prove the viability of the relational model and to gain some experience in designing and implementing a relational database. Their initial endeavors between 1974 and 1975 proved successful, and they managed to produce a minimal prototype of a relational database.

At the same time they were working on developing a relational database, researchers were also working to define a database language. In 1974, Dr. Donald Chamberlin and his colleagues developed Structured English Query Language (SEQUEL), which allowed users to query a relational database using clearly defined English-style sentences. The initial success of their prototype database, SEQUEL-XRM, encouraged Dr. Chamberlin and his staff to continue their research. They revised SEQUEL into SEQUEL/2 between 1976 and 1977, but they had to change the name SEQUEL to SQL (Structured Query Language or SQL Query Language) for legal reasons - someone else had already used the acronym SEQUEL. To this day, many people still pronounce SQL as “sequel,” although the widely accepted “official” pronunciation is “ess-cue-el.”

Although IBM’s System/R and SQL proved that relational databases were feasible, hardware technology at the time was not sufficiently powerful to make the product appealing to businesses.

In 1977 a group of engineers in Menlo Park, California, formed Relational Software, Inc., for the purpose of building a new relational database product based on SQL that they called Oracle. Relational Software shipped its product in 1979, providing the first commercially available RDBMS. One of Oracle’s advantages was that it ran on Digital’s VAX minicomputers instead of the more expensive IBM mainframes. Relational Software has since been renamed Oracle Corporation and is one of the leading vendors of RDBMS software.

At roughly the same time, Michael Stonebraker, Eugene Wong, and several other professors at the University of California’s Berkeley computer laboratories were also researching relational database technology. They developed a prototype relational database that they named Ingres. Ingres included a database language called Query Language (QUEL), which was much more structured than SQL but made less use of English-like statements. However, it became clear that SQL was emerging as the standard database language, so Ingres was eventually converted to an SQL-based RDBMS. Several professors left Berkeley in 1980 to form Relational Technology, Inc., and in 1981 they announced the first commercial version of Ingres. Relational Technology has gone through several transformations. Formerly owned by Computer Associates International, Inc., and now part of Actian, Ingres is still one of the leading database products in the industry today.

Meanwhile, IBM announced its own RDBMS called SQL/Data System (SQL/DS) in 1981 and began shipping it in 1982. In 1983, the company introduced a new RDBMS product called Database 2 (DB2), which could be used on IBM mainframes using IBM’s mainstream MVS operating system. First shipped in 1985, DB2 has become IBM’s premier RDBMS, and its technology has been incorporated into the entire IBM product line.

With the flurry of activity surrounding the development of database languages, the idea of standardization was tossed about within the database community. However, no consensus or agreement as to who should set the standard or which dialect it should be based upon was ever reached, so each vendor continued to develop and improve its own database product in the hope that it - and, by extension, its dialect of SQL - would become the industry standard.

Customer feedback and demand drove many vendors to include certain elements in their SQL dialects, and in time an unofficial standard emerged. It was a small specification by today’s standards, as it encompassed only those elements that were similar across the various SQL dialects. However, this specification (such as it was) did provide database customers with a core set of criteria by which to judge the various database programs on the market, and it also gave users knowledge that they could leverage from one database program to another.

In 1982, the American National Standards Institute (ANSI) responded to the growing need for an official relational database language standard by commissioning its X3 organization’s database technical committee, X3H2, to develop a proposal for such a standard. After much effort (which included many improvements to SQL), the committee realized that its new standard had become incompatible with existing major SQL dialects, and the changes made to SQL did not improve it significantly enough to warrant the incompatibilities. As a result, they reverted to what was really just a minimal set of “least common denominator” requirements to which database vendors could conform.

ANSI ratified this standard, “ANSI X3.135-1986 Database Language SQL,” which became commonly known as SQL/86, in 1986. In essence, it conferred official status on the elements that were similar among the various SQL dialects and that many database vendors had already implemented. Although the committee was aware of its shortcomings, at least the new standard provided a specific foundation from which the language and its implementations could be developed further.

The International Organization for Standardization (ISO) approved its own document (which corresponded exactly with ANSI SQL/86) as an international standard in 1987 and published it as “ISO 9075:1987 Database Language SQL.” (Both standards are still often referred to as just SQL/86.) The international database vendor community could now work from the same standards as vendors in the United States. Despite the fact that SQL gained the status of an official standard, the language was far from being complete.

SQL/86 was soon criticized in public reviews, by the government, and by industry pundits such as C. J. Date for problems such as redundancy within the SQL syntax (there were several ways to define the same query), lack of support for certain relational operators, and lack of referential integrity.

Both ISO and ANSI adopted refined versions of their standards in an attempt to address the criticisms, especially with respect to referential integrity. ISO published “ISO 9075: 1989 Database Language SQL with Integrity Enhancement” in mid-1989, and ANSI adopted its “X3.135-1989 Database Language SQL with Integrity Enhancement,” also often referred to as SQL/89, late that same year.

It was generally recognized that SQL/86 and SQL/89 lacked some of the most fundamental features needed for a successful database system. For example, neither standard specified how to make changes to the database structure once it was defined. It was not possible to modify or delete any structural component, or to make changes to the security of the database, despite the fact that all vendors provided ways to do this in their commercial products. (For example, you could CREATE a database object, but no ALTER or DROP syntax was defined.)

Not wanting to provide yet another “least common denominator” standard, both ANSI and ISO continued working on major revisions to SQL that would make it a complete and robust language. The new version (SQL/92) would include features that most major database vendors had already widely implemented, but it also included features that had not yet gained wide acceptance, as well as new features that were substantially beyond those currently implemented.

ANSI and ISO published their new SQL Standards - “X3.135-1992 Database Language SQL” and “ISO/IEC 9075:1992 Database Language SQL,” respectively - in October 1992. The SQL/92 document is considerably larger than the one for SQL/89, but it is also much broader in scope. For example, it provides the means to modify the database structure after it has been defined, supports additional operations for manipulating character strings as well as dates and times, and defines additional security features. SQL/92 was a major step forward from any of its predecessors.

While database vendors worked on implementing the features in SQL/92, they also developed and implemented features of their own, making additions to the SQL Standard known as “extensions.” While the extensions (such as providing more data types than the six specified in SQL/92) provided more functionality within a given product and allowed vendors to differentiate themselves from one another, there were drawbacks. The main problem with adding extensions is that it causes each vendor’s dialect of SQL to diverge further from the original standard, which prevents database developers from creating portable applications that can be run from any SQL database.

In 1997, ANSI’s X3 organization was renamed the National Committee for Information Technology Standards (NCITS), and the technical committee in charge of the SQL Standard is now called ANSI NCITS-H2. Because of the rapidly growing complexity of the SQL Standard, the ANSI and ISO standards committees agreed to break the standard into 12 separate numbered parts and one addendum as they began to work on SQL3 (so named because it is the third major revision of the standard) so that work on each part could proceed in parallel. Since 1997, two additional parts have been defined.

Everything you read in this book is based on the current ISO Standard for the SQL database language - SQL/Foundation (document ISO/IEC 9075-2:2011) - as currently implemented in most of the popular commercial database systems. ANSI also adopted the ISO document, so this is truly an international standard. We also used the documentation from the latest versions of IBM DB2, Microsoft Access, Microsoft SQL Server, MySQL, Oracle, and PostgreSQL to provide, where necessary, syntax specific to each product. Although most of the SQL you will learn here is not specific to any particular software product, we do show you product-specific examples where appropriate.