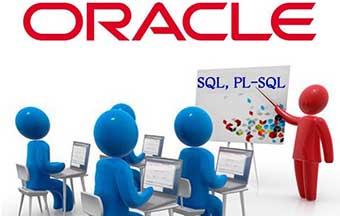 Structured Query Language (SQL) is a language that has been widely accepted and adopted for accessing relational databases. This language allows users to perform database operations such as reading, creating, modifying, and deleting the data. Since the summer of 1970, when Dr. E.F. Codd published the paper A Relational Model of Data for Large Shared Data Banks for the ACM journal, the language has matured comprehensively as an industry standard. With its broad range of features and easy adaptation to enterprise environments, the SQL language has been typically regarded as the most reliable language for interacting with relational databases.

PL/SQL was developed in 1991 by Oracle Corporation as a procedural language extension to SQL. Its ability to integrate seamlessly with SQL makes it a powerful language to construct the data access layer and the rich procedural extensions help in translating business logic within the Oracle Database. This first article in my blog introduces you to the PL/SQL language and refreshes some of the key programming concepts. The article is outlined as follows:

PL/SQL stands for Procedural Language-Structured Query Language(PL/SQL). It is part of the Oracle Database product, which means no separate installation is required. It is commonly used to translate business logic in the database and expose the program interface layer to the application. While SQL is purely a data access language that directly interacts with the database, PL/SQL is a programming language in which multiple SQLs and procedural statements can be grouped in a program unit. PL/SQL code is portable between Oracle Databases (subject to limitations imposed by versions). The built-in database optimizer refactors the code to improve the execution performance.

The advantages of PL/SQL as a language are as follows:

Although it is not used to build user interfaces, it provides the opportunity to build robust, secure, and portable interface layers, which can be exposed to a high-level programming language. Some of the key faculties of PL/SQL (PL/SQL accomplishments) are listed here:

A well-written PL/SQL program should be able to answer the following fundamental questions:

Well, there are multiple tips and techniques to standardize PL/SQL coding practices. But before we drill down to the programming skills, let us familiarize ourselves with the structure of a PL/SQL program. A PL/SQL program can be broken down into four sections. Each section carries a specific objective and must exist in the same sequence in a program. Let us have a brief look at the sections:

The following block diagram shows the structure of a PL/SQL block: 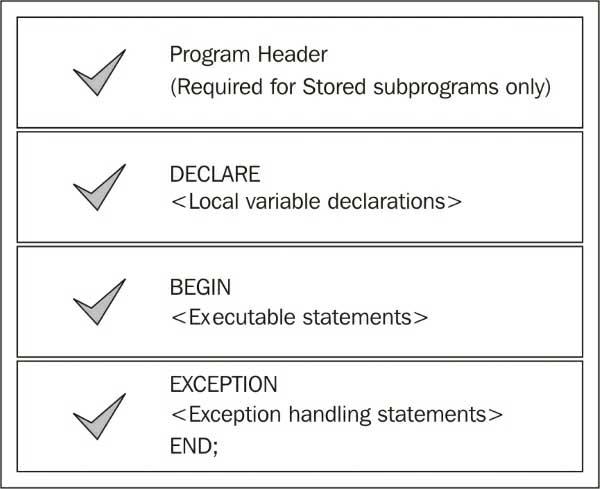 A PL/SQL block is the elementary unit of a program that groups a set of procedural statements. Based on the sections included in a PL/SQL program unit, we can classify a program under following categories:

So, let's get started with our first anonymous PL/SQL block. The block declares a string and displays it on screen. Note that each line in the program ends with a semi-colon and the block ends with a slash (/) for code execution.

The SERVEROUTPUT parameter is a SQL*Plus variable that enables the printing of DBMS_OUTPUT messages from a PL/SQL block.