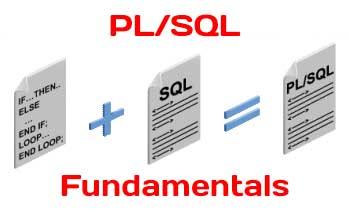 This article summarizes the fundamental components of the PL/SQL language: characters, identifiers, literals, delimiters, use of comments and pragmas, and construction of statements and blocks.

The PL/SQL language is constructed from letters, digits, symbols, and whitespace, as defined in the following table:

Characters are grouped together into four lexical units: identifiers, literals, delimiters, and comments.

Identifiers are names for PL/SQL objects, such as constants, variables, exceptions, procedures, cursors, and reserved words. Identifiers have the following characteristics:

Using PL/SQL’s reserved words as identifiers in your programs is not a good idea and can result in compilation or runtime errors that are difficult to troubleshoot.

If you enclose an identifier within double quotes, all but the first of these rules are ignored. For example, the following declaration is valid (although not exactly sensible):

Literals are specific values  not represented by identifiers. For example, TRUE, 3.14159, 6.63E-34, 'Moby Dick', and NULL are all literals of type Boolean, number, or string. There are no complex datatype literals because their values are internal representations; complex types receive values through direct assignment or via constructors. Unlike the rest of PL/SQL, literals are case-sensitive. To embed single quotes within a string literal, place two single quotes next to each other.

You can define your own quoting mechanism for string literals in both your SQL and PL/SQL statements. Use the characters q' (q followed by a straight single quote) to designate the programmer-defined delimiter for your string literal. Terminate the literal string with the programmer-defined delimiter followed by a trailing single quote—for example, q'!my string!'. NCHAR and NVARCHAR delimiters are preceded by the letters nq, as in nq'^nchar string^'. This technique can simplify your code when consecutive single quotes appear within a string, such as the literals in a SQL statement. If you define your delimiter with one of the four bracketing characters ( [ {<, you must use the righthand version of the bracketing character as the closing delimiter. For example, q'[ must be closed with ]'.

See the following table for examples:

Oracle may improve runtime performance if you make explicit the datatype of numeric literals. You can do so by including or excluding a decimal point or by using a trailing f or d, as shown in the following table:

You can also use the named constants:

as well as the BINARY_DOUBLE versions of these constants.

The datetime interval datatypes represent a chronological interval expressed in terms of either years and months or days, hours, minutes, seconds, and fractional seconds. Literals of these datatypes require the keyword INTERVAL followed by the literal and format string(s). The interval must go from a larger field to a smaller one, so YEAR TO MONTH is valid, but MONTH TO YEAR is not. See the following table for examples:

Delimiters are symbols with special meaning, such as := (assignment operator), || (concatenation operator), and ; (statement delimiter). The following table lists the PL/SQL delimiters:

Comments are sections of code that exist to aid readability. The compiler ignores them.

A single-line comment begins with a double hyphen (--) and terminates at the end-of-line (newline). The compiler ignores all characters between the -- and the newline.

A multiline comment begins with slash asterisk (/*) and ends with asterisk slash (*/). The /* */ comment delimiters also can be used for a single-line comment. The following block demonstrates both kinds of comments:

The PRAGMA keyword is used to give instructions to the compiler. There are six types of pragmas in PL/SQL:

Tells the compiler that the function, procedure, top-level anonymous PL/SQL block, object method, or database trigger executes in its own transaction space. See “Database Interaction” for more information on this pragma.

Tells the compiler to associate the specified error number with an identifier that has been declared an EXCEPTION in your current program or an accessible package. See “Exception Handling” for more information on this pragma.

Tells the compiler whether calls to a subprogram should be replaced with a copy of the subprogram. See “Optimizing Compiler” for more information on inline optimization.

This pragma is deprecated; use DETERMINISTIC and PARALLEL_ENABLE instead.

Tells the compiler that you intend for your user-defined function to be invoked primarily from SQL rather than PL/SQL. This allows Oracle to optimize for performance inside SQL (at the possible expense of its performance in PL/SQL).

Each PL/SQL program is a block consisting of a standard set of elements, identified by keywords (see Figure 1 ). The block determines the scope of declared elements and how exceptions are handled and propagated. A block can be anonymous or named. Named blocks include functions, procedures, packages, and triggers. 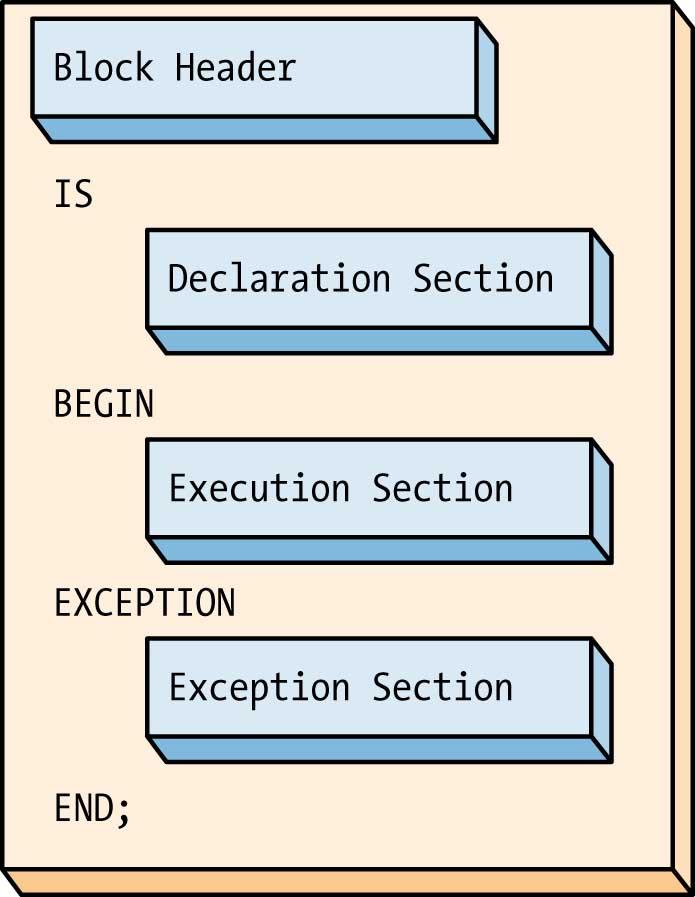 Here is an example of an anonymous block:

The following table summarizes the sections of a PL/SQL block: