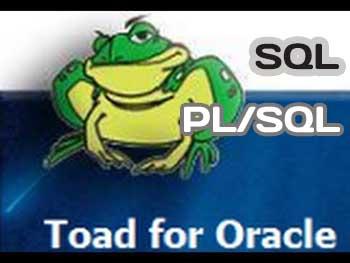 Welcome to the wild and wonderful word of Toad. There are a lot of things you’ll need to know before installing and using the product. Even though Toad is just a Microsoft Windows application with a standard Windows installer, there are some significant, non-obvious things to appreciate before beginning your journey.

While some experienced Microsoft Windows and Oracle database users might already know all the issues covered in this section, nonetheless it is worth reviewing to prevent any potential headaches or gotchas. For those not quite as comfortable with Microsoft Windows or the Oracle database, this section will be absolutely critical for your success and even satisfaction. Many Toad users have initially found the product difficult due to a lack of this knowledge. Most have eventually said “Wow, that was really easy once someone explained it!”

Toad has been around for almost two decades. It started as freeware built by one lone Oracle user who hated using the command line in SQL*Plus - and no graphical tools were available. Around 1997 Toad and that developer were acquired by Quest Software (now Dell Software). Thus began its commercial journey.

During those two decades there have been many Toad, as well as Oracle, database releases. Some important interdependencies exist among all of those releases. Knowing what version of Toad works with which version(s) of the Oracle database is one example - that is, compatibility. Then there’s what version of Toad supports which Oracle database version’s new features—that is, support. Figure 1.1 shows the history timeline for both products’ versions. You can learn a lot from this diagram. 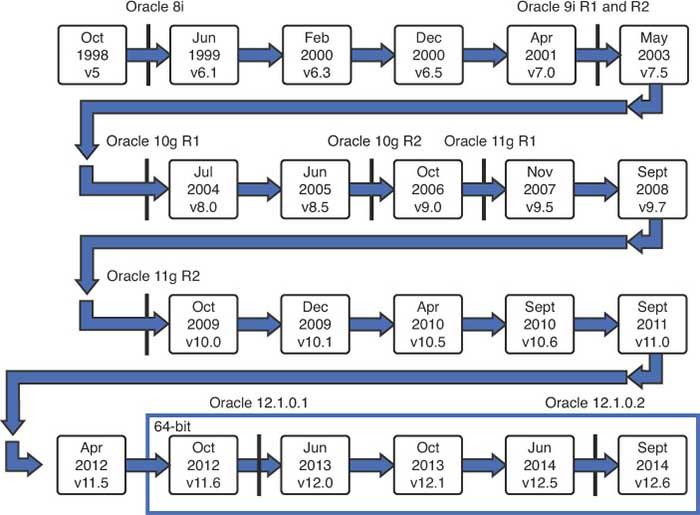 Note that Figure 1.1 entirely answers the support question. If the Toad release precedes the Oracle release in question, then obviously there’s no way that version of Toad can support the new database features. So, for example, a fair number of people are still using Toad 9.7, mostly because they did not pay for maintenance (that is, support) and thus were not entitled to updates. However, the same people also tend to be using Oracle 11g R2 or 12c. Because Toad 9.7 was released before either of those Oracle versions, such users won’t be able to use Toad to leverage 11g R2 or 12c features. In general, Toad support for new database version features will be either the first or second Toad release after the database release. In fact, Toad 10.1 supports Oracle 11g R2, whereas Toad 12.1 supports Oracle 12c (i.e., 12.1.0.1).

Finally, note back on Figure 1 that 64-bit support was added beginning with Toad 11.6.

One quite common issue that confuses most new (and even long-time) Toad users is knowing what edition they have purchased—and thus what features they have. Many people seem to wrongly assume that there is just one form of Toad that costs $975, and that singular Toad gives you every feature possible. In reality a great many Toad offerings called editions and suites are available. They include the following:

The Base edition is the foundation for all other editions and suites. It generally possesses just the basic, core features and functionality. That’s not to say that it’s crippleware. Many people find the Base edition more than sufficient for most normal database tasks, such as working with SQL or PL/SQL and browsing their database objects. Naturally, due to the lowest cost, this is a popular edition.

The Professional edition includes all the features in the Base edition, plus adds database import/export support and Code Analysis (formerly called CodeXpert). Years ago Professional also added the PL/SQL Debugger, but that feature has since moved down into the Base edition. Code Analysis is the big item here. It enables automated PL/SQL code reviews and rates the code using well-established software engineering metrics. Many larger shops use this to reduce coding defects.

The Xpert edition includes all the features in the Professional edition, plus adds integrated, push-button SQL tuning and the standalone, full-featured SQL Optimizer product. The integrated tuning within Toad’s SQL Editor is sufficient for most basic needs. When the SQL is more complex or you want far more control (that is, options) while tuning, you can invoke SQL Optimizer, which finds every combination of SQL variations yielding the same results but with different and hopefully better run times.

For each of these three editions, there is also an optional DB Admin Module that costs extra and adds numerous DBA features. Some people attempt to administer their database using just the Base edition, and for some it’s sufficient. For more complex DBA tasks users have two options: Oracle Enterprise Manager (OEM) or Toad’s DB Admin Module. Many choose the latter so they can perform all their tasks using just the one tool. Just the additional database object types supported, database browser, database health check, compare schema with full sync capability, and multi-schema compare/sync warrant the extra cost.

As for the various Toad Suites, they are an entirely different animal altogether. They bundle in other standalone tools along a theme: code developer versus DBA. The Developer suite contains Toad Xpert plus Code Tester for automated unit testing and Benchmark Factory for stress testing. The DBA suite contains Toad Xpert plus DB Admin Module, Spotlight for diagnostics, and Benchmark Factory for workload replay. Finally, the DBA suites for RAC and Exadata merely add Spotlight diagnostic support for their namesakes. Many people find Spotlight alone worth the price of the DBA suite because it is licensed by seat and not database server, enabling you to monitor any database having performance problems.

Finally, people often say, “I don’t know which Toad edition or suite we bought. Is there a way to find out?” For suites the answer is to look on your Windows Start menu for entries named Dell and/or Quest Software. Under those you will find entries for the names of the products that have been installed. If you see Code Tester, then you have the Developer suite. If you see Spotlight, then you have the DBA suite. If all you have is Toad and SQL Optimizer, then you have the Xpert edition. If all you see is Toad, then simply invoke Toad’s Main Menu → Help → About to display the splash screen, which displays your version and edition licensing information as shown in Figure 2. 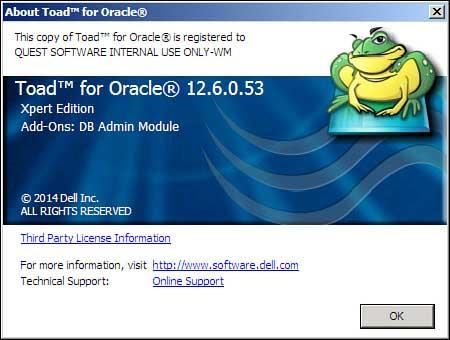