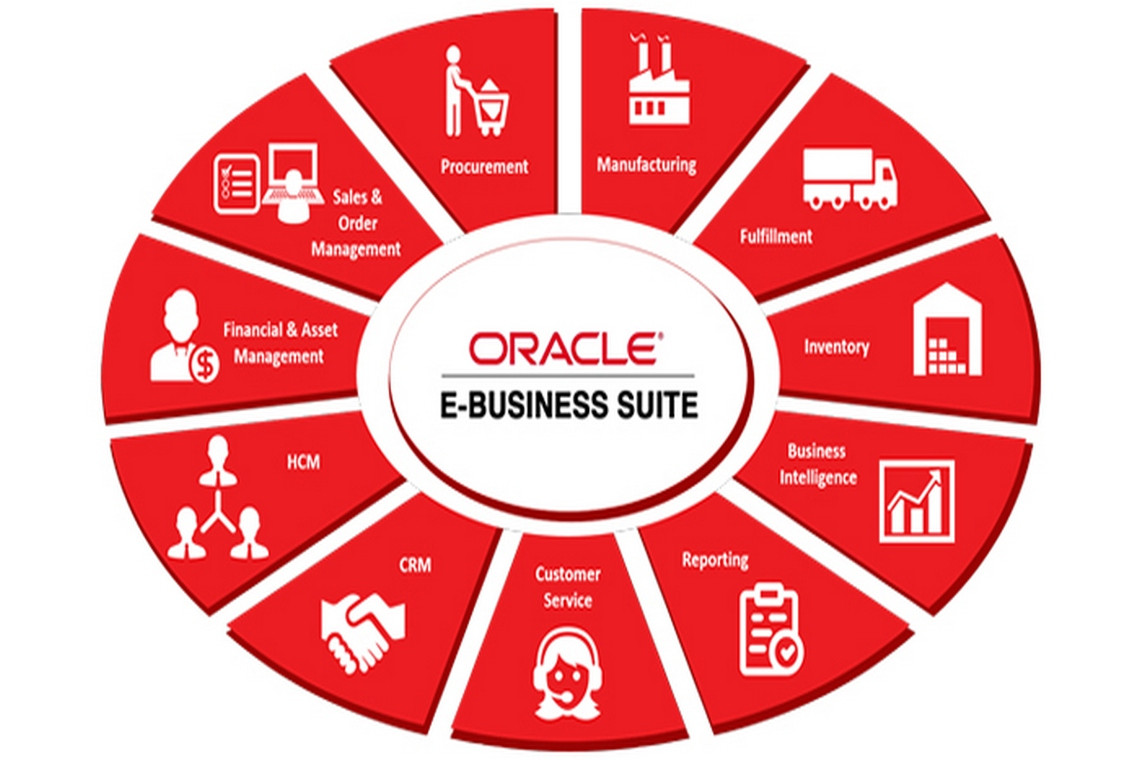 The EBS database, when installed using the latest startCD, is delivered as an Enterprise Edition 12.1.0.2 64-bit Oracle Database patched with a list of the latest technology bug fixes required for Oracle E-Business Suite Release 12.2, as well as a set of recommended patches. Oracle Home contains the Oracle Database 12c products (12.1.0.2) delivered with the 12c examples CD, as well. Using a Real Application Cluster (RAC) for the database tier is also an option; it brings a multinode configuration ability to the database tier. Rapidwiz, which is the installation tool of EBS, has an optional Oracle RAC installation, too.

The big difference in an EBS Oracle Home is the existence of an appsutil directory. The appsutil directory inside an Oracle EBS Oracle RDBMS Home contains Perl scripts, bash scripts, SQL scripts, a Java runtime environment, JAR files, a clone directory, and a log directory for the use of application-specific database activities, such as database tier cloning and AutoConfig, as well as pure database-oriented activities such as starting/stopping database and the listener.

The appsutil directory comes with the installation, but it can be rebuilt if needed.

Rebuilding it is easy. To do that, you create an appsutil zip file in the application tier using application utilities designed for this purpose and then copy this zip file to the Oracle Home of the database with the proper file permissions, which lets the Oracle Database software owner use the scripts and all the other files contained in it.

Once the copying is done, you just unzip to extract the content of it. The content is actually the appsutil directory.

The appsutil directory consists of several subdirectories and a context file, as listed next.

So, as shown, the database tier of EBS consists of a standard Oracle RDBMS Home that has some EBS-related additions/utilities on it. EBS-specific utilities bring a need for competence in managing the EBS database stack, as these utilities are used for critical operations. A problem or a misconfiguration in this layer can break down the application tier connections as they rely on apps-specific configurations inside the database. In addition, this adds a new level on top of standard database administration and makes things a little hard. On the other hand, the good news is that once you know what to do and understand the logic, these apps-specific additions (explained earlier) inside the database home make it almost automatic to manage the EBS database.

Just under the base directory, there are three directories named fs1, fs2, and fs_ne and one file called EBSapps.env.

In addition to these active and patch file systems, there is an fs_ne directory just under the base directory.

Figure 6 shows the run edition, patch edition, and noneditioned filesystems by providing the top-level directories named fs1, fs2, and fs_ne with their main subdirectories, which store the files that EBS application tier services rely on. 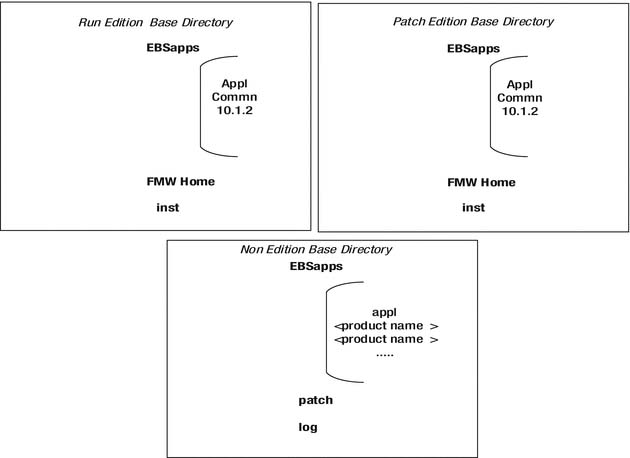 The following environment variables can be used to retrive to full directory paths of fs1, fs2, and fs_ne directories;

Under the fs1 and fs2 directories, there are three important top-level directories in an EBS 12.2 application file system structure.

These directories are inst (instance home), EBSapps, and the Fusion Middleware Home (FMW_Home).

The inst directory, also called instance home and pointed at by the $INST_TOP environment variable, contains most of the configuration files created by AutoConfig, configuration files for Oracle Application Server 10.1.3 (which is used by form and reports), and the other files such as forms log files (in the subdirectory pointed by $LOG_HOME), application services start/stop script logs (pointed at by ADMIN_SCRIPTS_HOME environment variable), 10.1.2 make logs, application listener log file, reports cache files, oam diagnostic files, and the context file for the use of AutoConfig.

Figure 7 shows the directory structure of the inst directory and its subdirectories. 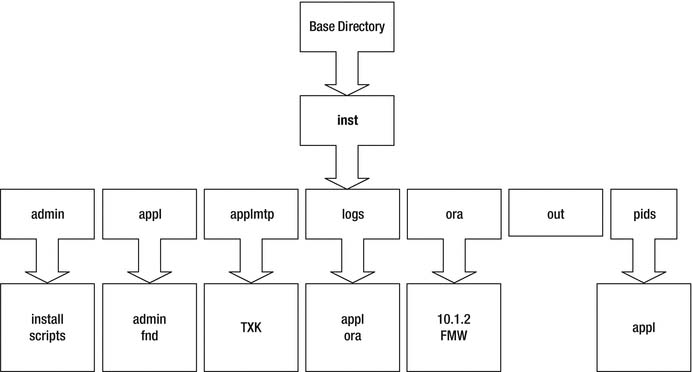 The EBSapps directory is one of the directories in the base directory and at the same level with the instance home directory.

That is, the environment file named in the form of <s_systemname>_<s_hostname>.env does not set the environment variable for 10.1.2 Oracle Home that is used by forms and reports.

Table 7 lists the environment files present in EBS 12.2 and gives information about what they are used for.

Besides, the appl directory stores several subdirectories for storing the product files.

Figure 8 shows the directory structure of the appl directory, which is pointed at by the APPL_TOP environment variable in a general manner. 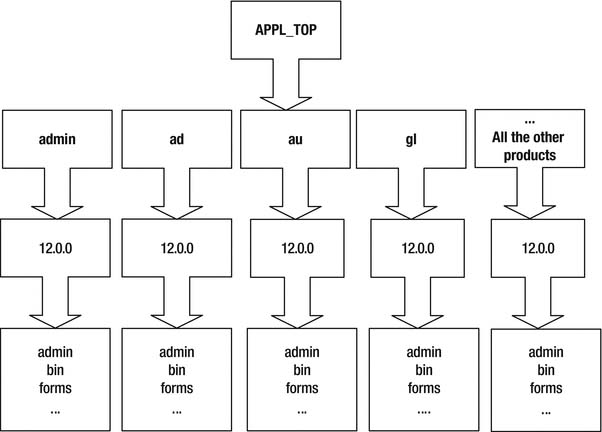 As shown in Figure 8, all the product directories contain subdirectories.

In most of the product directories, there are directories named admin, bin, forms, help, html, java, lib, log, mds, media, mesg, out, patch, reports, and sql.

The following list summarizes these subdirectories with the type of files stored in them.

The ad directory is the directory for the AD (Applications DBA product), and it stores the ad utilities such as adadmin and AutoConfig. The au directory is pointed at by AU_TOP, and its name comes from the application utilities.

AU_TOP contains important files such as PL/SQL libraries used by Oracle Forms, forms source files, a copy of all Java files used when regenerating the desktop client JAR, and certain reports needed by products such as Discoverer.

The common directory is also known as COMMON TOP and pointed at by the COMMON_TOP environment variable; it stores files that can be used by several EBS products and even third-party tools. It is called common because it stores the common files such as Java classes, HTML pages, and other files and directories used by multiple products.

Figure 9 represents the COMMON TOP directory structure with all the main subdirectories of it. 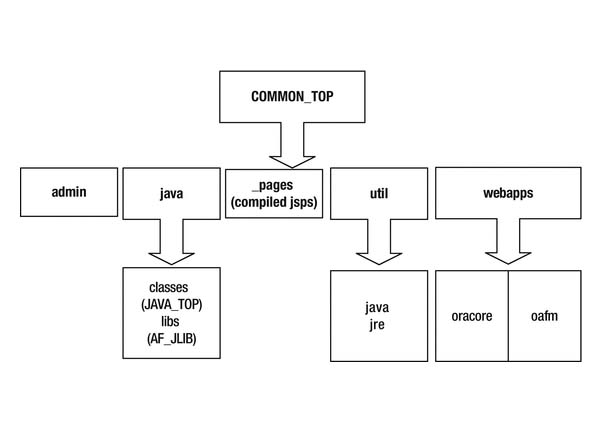 Moreover, all the WebLogic-related environment files and start/stop/control scripts such as setDomain.env and startWebLogic.sh are normally stored in the FMW directory.

Important environment variables in this context are listed here:

In addition, you have learned about the EBSapps.env script for setting these environment variables automatically.

Following is an example for setting the run edition environment.

Later in my blog, we will expand on all the information provided in this article by providing practical examples such as installation, upgrade, patching, and so on. Lastly in this blog, we will look at the technological differences between the major EBS releases.