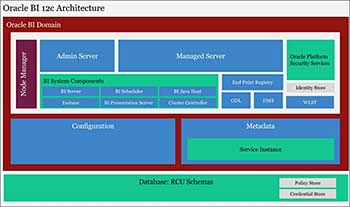 Fans of the Oracle BI suite of products will find Oracle Business Intelligence (Oracle BI) 12c a refreshing software version, both from its visual advancements and its technical foundation changes. This version of Oracle BI brings Oracle's flagship analytics system to the next level while maintaining its core enterprise-architecture concepts. The updated architecture allows for easier scalability of the solution across multiple servers, brings departmental BI and data visualization concepts into the mix, and strengthens its deployment processes with its new lifecycle-management tools. This blog focuses on an overview of the Oracle BI 12c architecture, with occasional references to its predecessor to give some perspective as to how far the Oracle BI 12 release has come in terms of a more straightforward implementation process and increased functionality.

Going right for the guts of the platform, it is best to understand how the Oracle BI 12c system is laid out by looking at the logical interoperability of the architectural components. Oracle BI 12c is a combination of several core technologies, which reside as common software components within the Oracle Fusion Middleware (FMW) stack inside the Oracle software eco-system.

The following illustration shows some of Oracle BI 12c's logical architecture components. Users of Oracle BI 11g will find some of this topology familiar, yet clearly different in many ways: 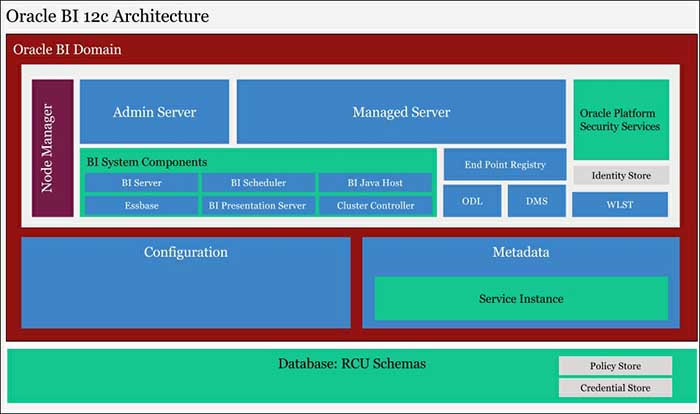 Similar to the Oracle BI 11g environment, once the software has been installed, all of the components in the architecture topology shown will exist. These components are transparent to the end users (that is, users in the organization who will view dashboards, reports, receive alerts, and so on). However, for the Oracle BI 12c administrators, and those that need to work with the technical aspect of the system, each of these areas of the Oracle BI 12c architecture is very important.

There are a few noticeable changes in architecture terminology when comparing Oracle BI 11g to Oracle BI 12c. Let's call out a few of these key differences, as they are relevant to the language used throughout the my blog.

The first is that Fusion Middleware Home, as it relates to the installation of Oracle BI and the location of files in the file system, is now called ORACLE HOME. In Oracle BI 11g, Fusion Middleware Home was the base install folder for your Oracle BI 11g installation. The same concept is used in Oracle BI 12c; it is now rather more appropriately called the ORACLE HOME. This makes sense as traditionally, in an n-tier server architecture, the Oracle BI system is installed on its own application server. Therefore, it would be the only core Oracle technology application on a machine, not conflicting with any other Oracle home install locations from other applications.

The second is that the Oracle Process Management and Notification Server (OPMN) is no longer used to manage the Oracle BI System Components. This has been replaced by a more integrated process, which still allows start, stop, and status of Oracle BI to be controlled by the command line or through Enterprise Manager. These components, previously managed by the OPMN, are still referred to as the BI System Components (that is, BI Server, BI Presentation Server, and so on). This also means that the idea of instances is now replaced by Service Instances.