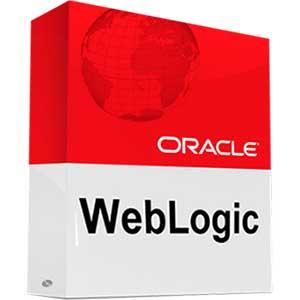 Let's talk a little more in detail about the enterprise application server that is at the core of Oracle Fusion Middleware, WebLogic. Oracle WebLogic Server is a scalable, enterprise-ready Java Platform Enterprise Edition (Java EE) application server. Its infrastructure supports the deployment of many types of distributed applications. It is also an ideal foundation for building service-oriented architecture (SOA). You can already see why BEA was a perfect acquisition for Oracle years ago. Or, more to the point, a perfect core for Fusion Middleware.

Before we move on to a description for each of those areas within WebLogic, it is also important to understand that the WebLogic Server software that is used for the installation of the Oracle BI product suite carries a limited license. Although the software itself is the full enterprise version and carries full functionality, the license that ships with Oracle BI 12c is not a full enterprise license for WebLogic Server for your organization to spin off other siloed JEE deployments on other non-OBIEE servers. This blog is hardly a guide to software licensing, but following are a few of those differences one should keep in mind when beginning or continuing an Oracle BI 12c implementation:

These items are simply a few nuances of the product suite in relation to Oracle BI 12c. Most software products contain a short list such as this one. However, once you understand the nuances, the easier it will be to ensure that you have a more successful implementation. It also allows your team to be as prepared in advance as possible. Be sure to consult your Oracle sales representative to assist with licensing concerns.

Despite these nuances, we highly recommend that in order to learn more about the installation features, configuration options, administration, and maintenance of WebLogic, you not only research it in relation to Oracle BI, but also in relation to its standalone form. That is to say that there is much more information (books, blogs, and so on) at large on the topic of WebLogic Server itself than WebLogic Server as it relates to Oracle BI. Understanding this approach to self-educating or web searching should provide you with more efficient results.

Upon installing and configuring Oracle BI 12c, the domain bi is established within the WebLogic Server. This domain is the recommended name for each Oracle BI 12c implementation and should not be modified.

The domain path for the bi domain may appear as ORACLE_HOME/user_projects/domains/bi .

This directory for the bi domain is also referred to as the DOMAIN_HOME or BI_DOMAIN folder.

Note
One thing to note is that the Enterprise Manager Fusion Control is actually a JEE application deployed to the Administration Server instance, which is why its web client is accessible under the same port as the Admin Server. It is not necessarily a native application deployment to the core WebLogic Server, but gets deployed and configured during the Oracle BI installation and configuration process automatically. In the deployments page within the Administration Console, you will find a deployment namedem.

The general idea behind Node Manager is that it takes on somewhat of a middle-man role. That is to say, the Node Manager provides a communication tunnel between the WebLogic Administration Server and any Managed Servers configured within the WebLogic Domain. When the WebLogic Server environment is contained on a single physical server, it may be difficult to recognize the need for a Node Manager. It is very necessary and, as part of any of your ultimate start-up and shutdown scripts for Oracle BI, the Node Manager lifecycle management will have to be a part of that process. Node Manager's real power comes into play when Oracle BI is scaled out horizontally  on one or more physical servers. Each scaled-out deployment of WebLogic Server will contain a Node Manager. 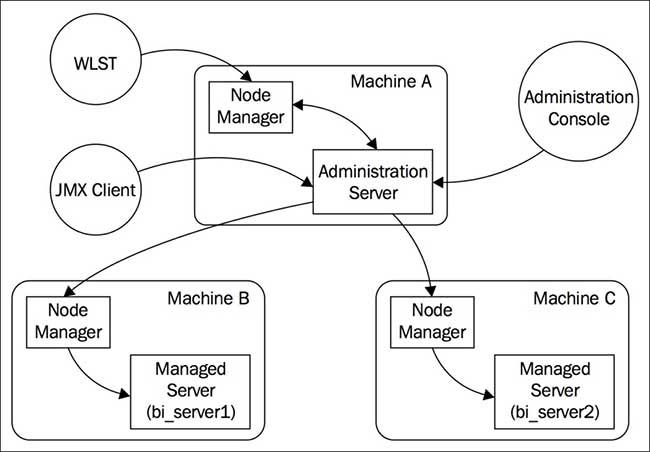 We briefly discussed the WebLogic Administration Console, which controls the administrative configuration of the WebLogic Server Domain. This includes the components managed within it, such as security, deployed applications, and so on. The other management tool that provides control of the deployed Oracle BI application ancillary deployments, libraries, and several other configurations, is called the Enterprise Manager Fusion Middleware Control.

Tip This seems to be a long name for a single web-based tool. As such, the name is often shortened to Fusion Control or Enterprise Manager. Reference to either abbreviated title in the context of Oracle BI should ensure fellow Oracle BI teammates understand what you mean.