What Is Oracle Exadata? 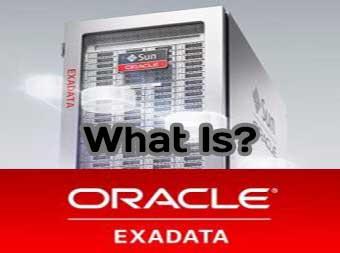 In our view, Oracle Exadata is a preconfigured combination of hardware and software that provides a platform for running Oracle Database (either version 11g Release 2 or version 12c Release 1 as of this writing). Since the Exadata Database Machine includes a storage subsystem, different software has been developed to run at the storage layer. This has allowed Oracle product development to do some things that are just not possible on other platforms. In fact, Exadata really began its life as a storage system. If you talk to people involved in the development of the product, you will commonly hear them refer the storage component as Exadata or SAGE (Storage Appliance for the Grid Environment), which was the code name for the project.

Oracle Exadata was originally designed to address the most common bottleneck with very large databases - the inability to move sufficiently large volumes of data from the disk storage system to the database server(s). Oracle has built its business by providing very fast access to data, primarily through the use of intelligent caching technology. As the sizes of databases began to outstrip the ability to cache data effectively using these techniques, Oracle began to look at ways to eliminate the bottleneck between the storage tier and the database tier. The solution the developers came up with was a combination of hardware and software. If you think about it, there are two approaches to minimize this bottleneck. The first is to make the pipe between the database and storage bigger. While there are many components involved and it’s a bit of an oversimplification, you can think of InfiniBand as that bigger pipe. The second way to minimize the bottleneck is to reduce the amount of data that needs to be transferred. This they did with Smart Scans. The combination of the two has provided a very successful solution to the problem. But make no mistake - reducing the volume of data flowing between the tiers via Smart Scan is the golden goose.

In this introductory chapter, we will review the components that make up Exadata, both hardware and software. We will also discuss how the parts fit together (the architecture). In addition, we will talk about how the database servers talk to the storage servers. This is handled very differently than on other platforms, so we will spend a fair amount of time covering that topic. We will also provide some historical context. By the end of the chapter, you should have a pretty good feel for how all the pieces fit together and a basic understanding of how Exadata works. The rest of the book will provide the details to fill out the skeleton that is built in this article.

An Overview of Exadata

A picture is worth a thousand words, or so the saying goes. Figure 1 shows a very high-level view of the parts that make up the Exadata Database Machine.

When considering Exadata, it is helpful to divide the entire system mentally into two parts, the storage layer and the database layer. The layers are connected via an InfiniBand network. InfiniBand provides a low-latency, high-throughput switched fabric communications link. Redundancy is provided through multiple switches and links. The database layer is made up of multiple Sun servers running standard Oracle 11g or 12c software. The servers are generally configured in one or more Real Application Clusters (RAC), although RAC is not actually required. The database servers use Automatic Storage Management (ASM) to access the storage. ASM is required even if the databases are not configured to use RAC. The storage layer also consists of multiple Sun x86 servers. Each storage server contains 12 disk drives or 8 flash drives and runs the Oracle storage server software (cellsrv). Communication between the layers is accomplished via iDB, which is a network-based protocol that is implemented using InfiniBand. iDB is used to send requests for data along with metadata about the request (including predicates) to cellsrv. In certain situations, cellsrv is able to use the metadata to process the data before sending results back to the database layer. When cellsrv is able to do this, it is called a Smart Scan and generally results in a significant decrease in the volume of data that needs to be transmitted back to the database layer. When Smart Scans are not possible, cellsrv returns the entire Oracle block(s). Note that iDB uses the RDS protocol, which is a low-latency, InfiniBand-specific protocol. In certain cases, the Oracle software can set up remote direct memory access (RDMA) over RDS, which bypasses doing system calls to accomplish low-latency, process-to-process communication across the InfiniBand network.

Exadata has undergone a number of significant changes since its initial release in late 2008. In fact, one of the more difficult parts of writing this book has been keeping up with the changes in the platform during the project. Following is a brief review of the product’s lineage and how it has changed over time: