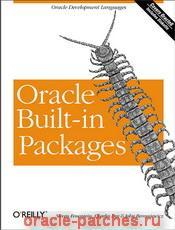 Oracle is the most popular database management system in use today, and PL/SQL plays a pivotal role in current and projected Oracle products and applications. PL/SQL is a programming language providing procedural extensions to the SQL relational database language and to an ever-growing number of oracle development tools. originally a rather limited tool, PL/SQL became with Oracle7 a mature and effective language for developers. now, with the introduction of Oracle8, PL/SQL has taken the next step towards becoming a fully realized programming language providing sophisticated object-oriented capabilities. Steven Feuerstein'sOracle PL/SQL Programming is a comprehensive guide to building applications with PL/SQL. That book has become the bible for PL/SQL developers who have raved about its completeness, readability, and practicality.Built-in packages are collections of PL/SQL objects built by Oracle Corporation and stored directly in the Oracle database. The functionality of these packages is available from any programming environment that can call PL/SQL stored procedures, including Visual Basic, Oracle Developer/2000, Oracle Application Server (for web-based development), and, of course, the Oracle database itself. Built-in packages extend the capabilities and power of PL/SQL in many significant ways. for example:

·         DBMS_PIPE communicates between different Oracle sessions through a pipe in the RDBMS shared memory.

·         DBMS_JOB submits and manages regularly scheduled jobs for execution inside the database.

The first edition of Oracle PL/SQL Programming contained a chapter on Oracle's built-in packages. but there is much more to say about the basic PL/SQL packages than Feuerstein could fit in his first book. In addition, now that Oracle8 has been released, there are many new Oracle8 built-in packages not described in the PL/SQL book. There are also packages extensions for specific oracle environments such as distributed database. hence this book.Oracle Built-in Packages pulls together information about how to use the calling interface (API) to Oracle's Built-in Packages, and provides extensive examples on using the built-in packages effectively.The windows diskette included with the book contains the companion guide, an online tool developed by RevealNet, Inc., that provides point-and-click access to the many files of source code and online documentation developed by the authors.The table of contents follows:PrefacePart I: Overview

Appendix. What's on the companion disk?